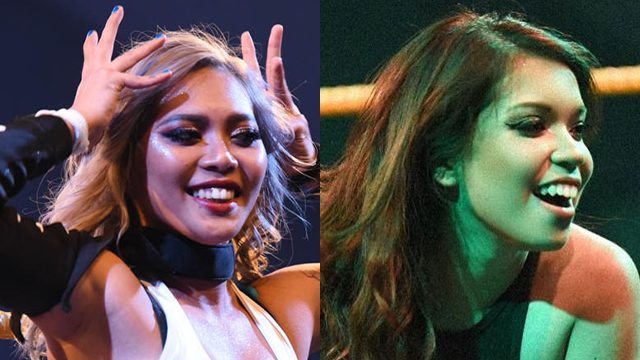 Nina was the first to speak out on Twitter as she opened up about her encounter with Cuevas, detailing how he would make inappropriate jokes, creep up to her, follow her around and make lewd comments.

“This dude finds his way and sits diagonally to me, and would make more inappropriate jokes, wink at me, bite his lip, etc… And would say things like: ‘Why are you so far away?'” wrote Nina.

“He then asks me about my tattoos, in which I told him I had 4 at that time, and being in a crowded and noisy place, he misunderstood what I said at some point and reacted: ‘WAIT. YOU HAVE A TATTOO ON YOUR BUTT??!”

“I said: ‘No, I don’t have a tattoo on my butt.’ And he goes: ‘Well, either way, if you do have a tattoo on your butt, I’ll get to see it when we fuck.’ And then he winked at me. My jaw dropped. This dude’s name is Alex Cuevas.”

Champion wrestler Crystal followed suit as she posted a series of tweets on her own experiences of sexual harassment in the sport and with Cuevas. (Rappler Talk Sports: 3 PWR wrestlers in WWE tryout)

I never really felt safe. All the whispers. All the dms. All the ass grabs. The “accidental” brush against the boobs. The threats of being blackballed. The rumors. Being backstabbed so no one will ever believe you. NO AMOUNT OF APOLOGIES. WILL EVER UNDO THE DAMAGE. #SpeakingOut pic.twitter.com/xpPFQCqqfP

“I was raped when I was 8. Growing up, I used to be so scared of men,” started Crystal.

Crystal’s first experience came when she was still training to become a wrestler. She called out wrestler Peter Verzosa, who tried to kiss her after a night out, but when she reported it to her other batchmates and the former PWR president Yusuf Meer, they brushed her off.

“A few weeks later, I heard a rumor that the president (who has been kicked out of the company) has been saying that I was a whore,” said Crystal.

Although Verzosa had apologized to Crystal after her revelation, she didn’t feel his sincerity as he even pitched her story as an angle for a future wrestling match.

“He’s basically saying that if ever he comes back to wrestling, he wants to make it into a drama angle,” Crystal told Rappler in a phone interview.

The Queen of Philippine Wrestling noted other sexual advances from other wrestlers from the PWR roster and international guests, to the point that she experienced other wrestlers groping her.

In a tweet, which Crystal said she accidentally deleted, she shared how Cuevas would try to get close to other female wrestlers, pretending to use them as wingwomen. But she recalled an incident when he pinned her down during an overnight event.

Although Crystal managed to defend herself, the moment was traumatizing, and Cuevas even spread lies of them having sex.

With Nina and Crystal’s bravery to speak up, other female wrestlers and even former schoolmates of Cuevas in Singapore have come forward with their own stories against him.

SPW then responded by releasing Cuevas in an effort to cultivate a safe environment for all wrestlers of different backgrounds.

“SPW does not condone matters involving abuse, sexual grooming and sexual assault. Any such behavior by SPW members will be dealt with severely,” read the statement.

The PWR has also released its own statement and voiced its support to sexual harassment victims in the sport like Nina and Crystal.

“PWR stands by our wrestlers who courageously spoke out against their abusers. And we will continue to stand by anyone who needs help speaking out,” read the statement.

“We have not been perfect in addressing these issues in the past, but we have been taking this as an opportunity to grow, learn, and most importantly, to listen more.”

In an interview with PWR executive Tabbi Tomas, the organization has also created a management committee to assist the victims in actions that they want to take against their abusers.

“We act on what the victims wants. We want to make sure that we’re acting with them. We usually consult them first then we wait for what they want and hindi namin bibiglain (we don’t want to rush them),” said Tomas.

For Crystal’s cases, Tomas said they committed to communicating with the former PWR administration under Meer to find witnesses and decide the best action against the harassers.

PWR also got the services of human resources consultants and members from the Gabriela Women’s Party to help guide them in addressing these issues.

“We’re seeking help from professionals who have handled cases like this. We have contacts with Gabriela. We’re planning to reach out to them. For example, the victim needs counseling and we also provide help if the victim wants to file cases, we have a laywer,” added Tomas.

Crystal agrees with Tomas, a female wrestler herself, that the revelations have forced organizations to deal with the toxic masculinity mentality in the sport.

“There are a lot of kind, responsible men in wrestling but there are bad apples and they stick together,” said Crystal.

“We can’t deny the fact it’s happening. Maybe it’s because we’re just 6 women to 20-something men,” said Tomas. “We talked about this in the mancomm that something has to change because it already happened so it’s a wake up call for everyone.”  – Rappler.com