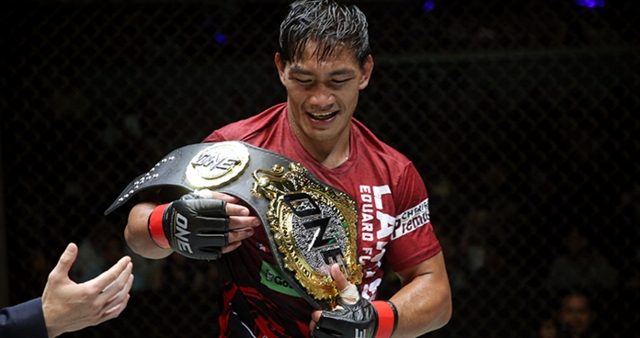 Facebook Twitter Copy URL
Copied
For former ONE Championship lightweight titlist Eduard Folayang, the focus is now on the next batch of Igorot warriors

MANILA, Philippines – Over the last decade, Team Lakay turned into one of the most prominent gyms in Asia.

What started as a makeshift training camp first on school grounds and then above a market butcher shop, the fabled stable from Baguio City has produced 5 ONE Championship world titleholders.

However, for the camp’s most prominent member – former ONE lightweight world champion  Eduard “Landslide” Folayang – the focus is now on the future and the next batch of Igorot warriors.

“The visions we had then when we were just building this [gym] are slowly being fulfilled,” Folayang said. “We do not want it to stop with us. We want people to continue and we’re seeing it now.”

Ruling over the ONE strawweight division is 24-year-old World Champion  Joshua “The Passion” Pacio, who has beaten 4 of the top 5 ranked athletes in the weight class.

Fifth-ranked strawweight Lito “Thunder Kid” Adiwang is also turning out to be one of the crowd favorites due to his explosive style. The 27-year-old has yet to lose a match in ONE Championship, be it on the main roster or in Rich Franklin’s ONE Warrior Series.

Not far behind the duo is Danny “The King” Kingad, who made it all the way to the finals of the ONE flyweight World Grand Prix and went 3 hard rounds with 12-time world champion Demetrious “Mighty Mouse” Johnson.

Folayang believes these athletes are just beginning to show what they are capable of.

“Looking at these warriors, man, you can really see their potential and that excites me,” Folayang said.

“It’s exciting to see how far they’ll go as athletes. On their potential alone, I know that they will go a long way.”

Luckily for these young standouts, “Landslide” is more than willing to guide and help them reach new heights in the sport he once dominated.

“I always remind them that once you start being known, you’ll get a certain amount of influence over people, and I want them to use it to do great things and inspire more,” Folayang said.

“Humility is also very important to an athlete. I don’t want them to stop being hungry. I want them to always work on their skills and add new dimensions to their game. That’s the key to longevity.” – Rappler.com

ONE returns to action with ONE: NO SURRENDER, a closed-door, audience-free show set for July 31 in Bangkok, Thailand. Catch the action for free by downloading the ONE Super App.