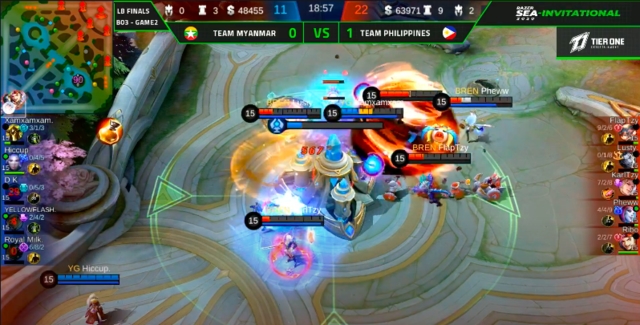 Relegated to the lower bracket by Vietnam’s Vec Fantasy Main, Bren Esports vented its ire on Yangon Galacticos with a sweep of their best-of-three series to clinch the last grand finals berth.

FlapTzy dashed all hopes of Yangon Galacticos forcing a rubber match as he registered 9 kills, 6 assists, and 2 deaths with Thamuz in the Game 2 win that saw Bren Esports lead 22-11 in kills and 9-3 in turrets destroyed.

Bren Esports carry KarlTzy had 7 kills, 8 assists, and 2 deaths, while Pheww tallied 4 kills, 9 assists, and 4 deaths with Selena in Game 2.

Pheww was just as effective in Game 1 as he used Pharsa to create space for Bren Esports, chalking up 5 kills, 9 assists, and 2 deaths in the swift victory that lasted for less than 15 minutes.

Yangon Galacticos found no openings in Game 2 with two of its players – DK (Atlas) and Hiccup (Luo Yi) – ending the match with zero kills and combining for 9 of their 22 deaths.

Bren Esports will try to exact revenge on Vec Fantasy Main when they meet in the best-of-five grand finals on Sunday, July 12. – Rappler.com