Djokovic not slowing down in run-up to Wimbledon finals 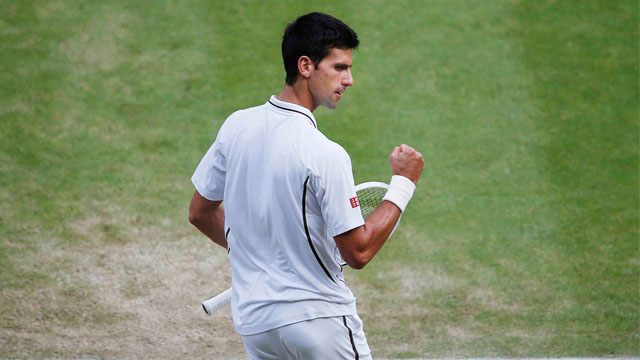 LONDON, United Kingdom – World number one Novak Djokovic takes on Argentina’s Juan Martin del Potro for a place in the Wimbledon final on Friday, July 5, insisting he can get even better.

But Djokovic, having avoided the shock exits suffered by the likes of Roger Federer and Rafael Nadal at this year’s Wimbledon, believes he cannot become complacent.

“It’s the mindset I always try to have, because that’s something that keeps me going every single day on the practice courts, day in, day out, trying to give my best and trying to always inspire myself to play better tennis,” said the top seed.

“I know I have a quite complete game, but I still feel there is room for improvement.”

The Serb, the 2011 Wimbledon champion, will be playing in his 13th successive Grand Slam semi-final, 10 behind the record held by Federer.

At Wimbledon this year, he is chasing a 7th major.

Del Potro, the 2009 US Open champion, just about survived his quarter-final against David Ferrer when he strained his already heavily-bandaged left knee in a sickening Centre Court tumble.

Djokovic has an 8-3 winning record over Del Potro but the Argentine won their only other previous meeting on grass in the 2012 Olympics bronze medal play-off which took place at Wimbledon.

In 2010, he played just 3 tournaments and saw his ranking slip to 257 in the world after undergoing wrist surgery.

“He struggled with injuries in last few years, but every time he comes back he comes back very strong because he just has this talent and qualities as a player,” said Djokovic.

Del Potro’s 2009 US Open win was the only time in the last 33 Grand Slams that the champion wasn’t called either Federer, Nadal, Djokovic, or Murray.

Like Djokovic, Del Potro has reached the last-4 – his first semi-final at Wimbledon – without dropping a set.

“I will need to be 110% against Novak. He’s the number one. He’s a former champion. It’s going to be a more difficult match for me,” Del Potro said. Second-seeded Andy Murray, the runner-up to Federer in 2012, will be playing in his 5th consecutive Wimbledon semi-final, but he had to come from two sets to love down to beat Fernando Verdasco in the quarter-finals.

It will be his 13th major semi-final, equalling the national record set by Fred Perry, the last British man to win the title in 1936.

Read: Murray guns for 1st Wimbledon crown for Britain since 1936

He takes on 24th seed Jerzy Janowicz, the first Polish man to reach the semi-finals of a major.

“It will be a very tough match. Janowicz has a big serve. He’s a big guy with a lot of power,” Murray said of his opponent who has fired a tournament-leading 94 aces at Wimbledon this year.

They have a 1-1 record but Murray lost their last meeting at the Paris Masters in 2012 when Janowicz came through qualifying to reach the final.

“He also has pretty good touch. He likes to hit drop-shots. He doesn’t just whack every single shot as hard as he can,” the Scot said.

Janowicz, the 24th seed, is this year’s rags-to-riches Wimbledon story.

When he once played the US Open, New Yorkers coughed up to buy him tennis shoes while, two years ago, when he was ranked at a lowly 221 in the world, he didn’t have the cash to buy a ticket to the Australian Open.

“I have had some troubles during my career. You practice and work for these kind of moments,” said Janowicz, who broke down in floods of tears on Wednesday, July 3, when he defeated compatriot Lukasz Kubot. – Rappler.com