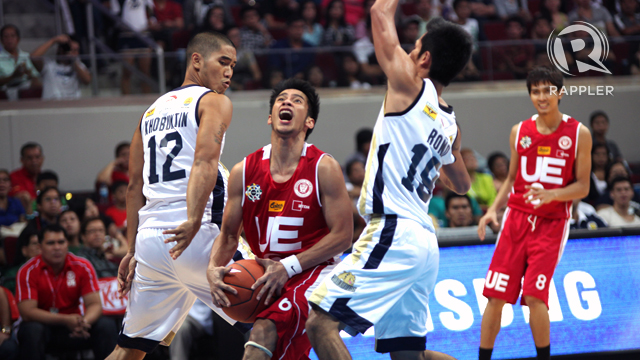 MANILA, Philippines – Back to the drawing board.

The University of the East (UE) starts from scratch as they take on National University (NU) in the main game of first-round action in the UAAP Season 76 men’s basketball tournament at the Smart Araneta Coliseum Saturday, July 6.

The UE-NU game marks a rematch since the two teams battled it out for the FilOil title last month.

The Red Warriors, who captured the FilOil Flying V Hanes Cup title, were sent crashing back to earth by the FEU Tamaraws, 78-89 in their opening game.

“You can’t play for just 20 minutes of the game,” rued UE head coach Boycie Zamar after his team led by 5 after the first half but collapsed in the second half that caused the demise of the team. “You expect na ito na ang tunay na laban (You expect this to be the start of the real game).”

Prolific point guard Roi Sumang, Sierra Leonean big man Charles Mammie, Chris Javier, Ralf Olivarez, and Jay-ar Sumido will lead the Warriors’ attempt to get its first win of the season and jumpstart its bid for the championship.

On the other hand, the Sampaloc-based dribblers began their season on a rousing note after drubbing 5-time champion Ateneo, 64-54 last Sunday.

“UE really outplayed us in the finals of the FilOil,” said NU mentor Eric Altamirano. In the first game, season host Adamson University and University of Santo Tomas cross paths, with both squads eyeing its second win after winning their respective opener.

The Soaring Falcons defeated UP, 79-67 last Sunday while the Growling Tigers edged out La Salle, 63-58, in overtime on opening day.