Intentional or not? A look at the Teng-Javillonar incident

Jul 12, 2013 7:04 PM PHT
Facebook Twitter Copy URL
Copied
Coach Karl Santamaria looks at the collision that injured Jeric Teng's shoulder and tells us whether it was intentional or not.

MANILA, Philippines — The push, hit, contact, cheap shot or whatever term you may want to use to describe what happened in last Wednesday’s (July 10) UAAP men’s basketball game between University of Santo Tomas (my alma mater) and National University (my current employer) has spawned various opinions – from hardcore UAAP fans to students and alumni of both schools — on what really happened at the 1:19 mark of the second quarter.

We, as fans can only surmise on what really happened, and it may only be Jeff Javillionar and Jeric Teng themselves who can really provide the meaningful and conclusive answers as to the reasons and motives (if any) that led to the contact that clearly affected the outcome of the game and future games, especially of the Growling Tigers, this season.

What I will try to accomplish is to dissect the factual evidence (ala-CSI, or in this case, Nat Geo’s Air Crash Investigations) based on the game video, applying my amateur-level knowledge of physics as well as some bio mechanics (all provided by my years in UST). Hopefully, we can come to an objective and unbiased conclusion as to the true nature of the incident — intentional or accidental. 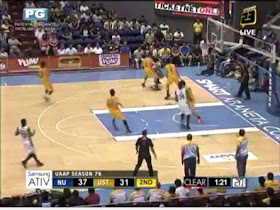 At the 1:21 mark, Ray Parks is double-teamed in transition while Teng (at the free throw line) is settling on defense and focused on the ball. But after seeing that the fastbreak attempt by NU has been stymied, he stops, looks and tries to locate his man. Javillionar is not on the screen/play. 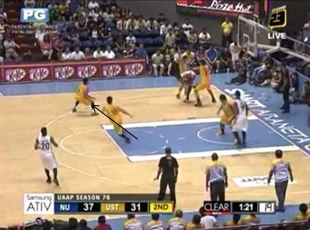 Teng suddenly moves to the direction of the 3-point area while still focused on Parks and the ball, seemingly trying to cut off any passing lane for Parks to his shooters. Parks, by this time, has managed to extricate himself from the double team and was threatening to make a move to the basket or attempt a shot at the basket. Javillionar is still not in the picture. 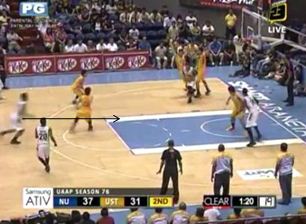 1:20: At this point, we see Javillionar enter the picture. Notice his blurred figure that indicates he is moving pretty fast. Javillionar is trailing the play so we can assume he was running at a fast pace, when he sees the following: 1) Parks getting out of the double team, and 2) the wide open lane.

So he naturally starts sprinting to make a dive cut to the basket and Parks seems to sense this as well. Parks sees Javillionar starting his dive and is in a position to pass the ball. Teng, in this picture, quickly realizes this as well and is about to make a fateful adjustment on defense.

Notice that Javillionar’s direct line to the shaded lane (arrow) does not in any way interfere with the current position of Jeric Teng. Simply put, he had an open path to the lane, was the first player to make a move in that direction and wasn’t running into Teng’s path. 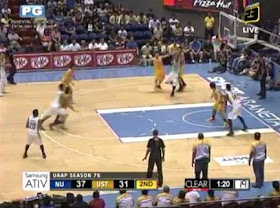 In this frame, you clearly see the two players making initial contact. Notice that Javillionar keeps running on the same path and Teng is now at the top of the key after making a sudden sidestep towards his right while trying to anticipate a Parks pass to the area, as compared to a couple of steps to the side of the free throw semi circle in the previous shot indicating that he suddenly changed direction again.

In the laws of physics, it is said that two objects cannot occupy the same space at any given time. At this point, you can see that Javillionar hasn’t lowered his shoulder or extended his forearm. More importantly, he was not looking at Teng, indicating no intention to hit or harm. Another thing to note is that Parks, from a passing position, is suddenly attempting a shot at the basket, and this catches both Teng and Javillionar by surprise. 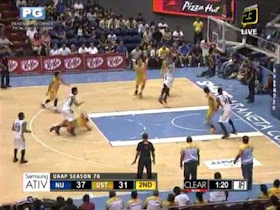 1:20: At this point, the two big bodies have collided at high speeds. Notice that Javillionar still does not have a lowered shoulder or extended arms or forearms. This indicates that he is as surprised as Teng with the contact.

Unfortunately, Teng, in the nanosecond right before impact had lost his proprioceptive sense. Proprioception is the ability to sense the position and location and orientation and movement of the body and its parts.

He is helpless at this point, unable to know what is up and down, left or right. He thus lost control of his body to brace for the impact. What makes it worse is that he has his arms extended and in an awkward position. The succeeding impact on the ground is what causes the injury on his shoulder. Sorry, Jeric, but no push can ever pop a shoulder as you claim. But an arm on that angle that impacts the floor surely will.

In sports terminology, it was a “bang-bang” play. The action was so sudden, and took only two game seconds. You can watch the video above, but you still won’t see what exactly happened unless you have super slow-motion video.

Indeed, it was a very unfortunate incident and was something we don’t wish to happen to any player. But in my humble opinion, it was an unintentional hit. And 9 times out of 10, Jeric won’t get injured on that play. It was just a a multitude of factors that had combined and gone horribly wrong for him.

I understand the Teng family and the UST fans getting emotional and calling it a “dirty play,” especially because Javillionar has the reputation of being an “enforcer.” But fact of the matter is it was an accident that no one wanted to happen. The UAAP Commissioner’s Office also had just finished reviewing the video, and gave Javillionar a “warning” for the incident. It’s further proof of basketball experts concluding that it was not an intentional hit.

With that, I wish Jeric Teng a speedy recovery and, hopefully, he doesn’t miss any games and comes back 100% for the rest of the season! – Rappler.com

Karl Santamaria is the head coach of the National University Tennis Team. He is also the Fed Cup and Jr. Fed Cup coach for the Philippines and is an ITF-certified Level 2 coach. He graduated from the UST with a degree in Business Administration. He also played for (1997-2001) and coached (2001-2011) the Growling Tigers in the UAAP, winning 7 men’s and 5 women’s championships.

This was posted first on Santamaria’s blog here. It was republished with his permission.