Fastbreak: Ateneo sizzles, UST gets back on track The Best: The Ateneo that we knew in the last 5 seasons is back. Juami Tiongson and Kiefer Ravena rose as the leaders that they are as they spearheaded the Katipunan squad’s offense by scoring 20 and 18 points, respectively. The duo took turns in keeping FEU at bay and even led by as much as 33 in the 3rd canto.

The Worst: Terrence Romeo’s 19 points may look good in the stat sheet but in reality, they came when it did not matter anymore. Romeo tried to carry FEU on his back in garbage time as he scored 14 of his points in the last 6 minutes but with Ateneo already leading by more than 20, he could not do anything to turn the game around.

Kidney Stones: In the post-game interview, Ateneo captain Tiongson dedicated the win to their head coach Bo Perasol. Perasol is coming off a recent surgery where he had his kidney stones removed. From the sidelines, it is evident that the first-year Ateneo coach is still hurting.

“I had some kidney stones removed so there was a time after the surgery that I had to rest but I have to be with them. When I was called today there was some internal bleeding,” Perasol told the press after their big win against FEU. “I can’t sit straight and can’t sit right away everytime I make a timeout because it’s kind of hurting but it’s nothing serious. It’s just that we have to do whatever it takes and I am really relieved that we can, if we really think that we can.” 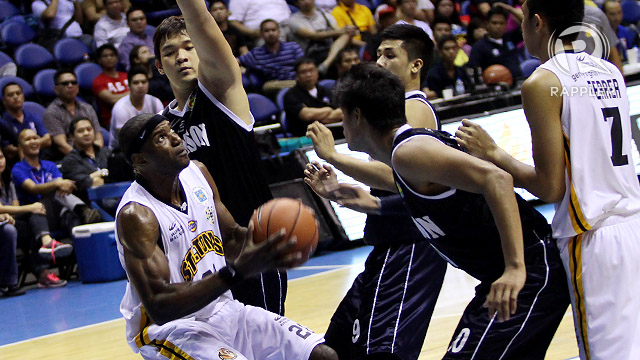 The Best: Karim Abdul put on another impressive double-double for University of Santo Tomas as he finished with 19 points and 12 boards. At one point of the game, he got his shoulder injured and remained on the floor for quite some time that resulted in an Ingrid Sewa dunk on the other end of the court. It looked like he can’t come back to game as he writhed in pain and struggled to find his feet.

In the next dead ball, coach Pido Jarencio ran towards his boy and shouted “you’re a strong boy, that’s nothing” as he helped him return to the bench. A couple of minutes later, Abdul came back to the game and powered the Growling Tigers back to .500.

The Worst: Rodney Brondial, Jericho Cruz, Don Trollano, and Jansen Rios may have all scored more than 12 points each but it was not enough against UST. Adamson shot an atrocious 16 percent from beyond-the-arc and if they just performed better from downtown, it could have been a much closer game.

What’s even worse: This loss could be it for the Soaring Falcons. They started the season quite brightly coming under the radar. The Season 76 hosts, however, could not sustain their momentum as they crumbled to a 6th straight loss at the hands of the Growling Tigers. They now stand one rung ahead of the already-eliminated University of the Philippines at 3-8. Looks like we’re not going to see Adamson in the post season. – Rappler.com