Azkals bow to tougher UAE side 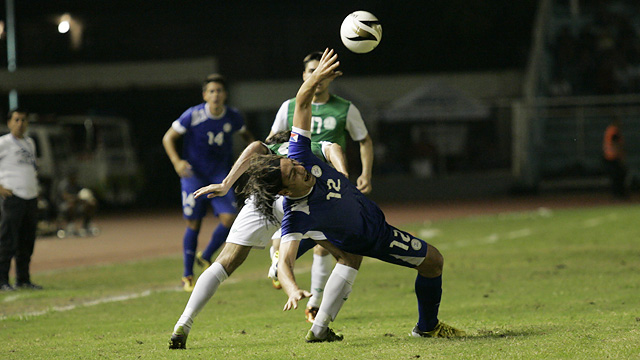 MANILA, Philippines – The Philippine National Football Team was taught a lesson by the superior United Arab Emirates side as they suffered a stinging 0-4 defeat, Saturday, November 9, at the Al Nahyan Stadium in Abu Dhabi.

Playing without some of their Europe-based key players, the Azkals were clearly outclassed by the 71st-ranked UAE, as the home team dominated the game in every aspect ahead of their AFC Asian Cup qualifiers match against Hong Kong next week.

But UAE proved to be too good for the top-ranked South East Asian squad as they rained Sacapano with shot after shot, finally opening the scoring in the 19th minute through a Salem Musalam tap in.

The Philippines, ranked 137th in the world, held on in the following 20 minutes as Chris Greatwich fired what would have been the best chance for the Azkals for the night but his shot grazes way wide the right post.

Adel Abdullah Abas then doubled UAE’s lead 5 minutes from halftime as he took advantage of the scramble in front of the Philippines’ goal and punch through his first goal for his national side.

The Azkals then opened the second half brilliantly, raining UAE with threatening crosses from the right flank but the home team’s backline had every answer to every Philippine attack, thwarting any plans of an Azkals comeback.

Al Wahda’s star forward Ismail Matar then made it 3-0 for UAE just before the hour-mark with a world-class strike that went pass Sacapano.

The long-time Army keeper tried to keep the score from getting out of hand but UAE’s 29 shots – 11 of which on target – was just too much for Sacapano to handle. The Azkals, in contrast, were only able to fire 3 shots with none really threatening to go inside the goal.

Ali Mabkhout then wrapped the night up with a 4th UAE goal as he cruised through the left flank for an easy strike that hit the side netting.

The Philippines will visit 154th-ranked India on November 15 as they continue their preparation for the AFC Challenge Cup in Maldives next year. – Rappler.com