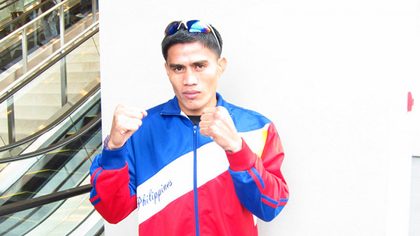 SINGAPORE – The undefeated streak is broken.

On Saturday, May 5, former unbeaten Pinoy featherweight powerhouse Lorenzo “Thunderbolt” Villanueva(22-1-1, 21KO) got his first taste of defeat as he lost via shocking 2nd round TKO to Daud “Cino” Yordan (29-2, 23KO) at the Marina Bay Sands Expo & Convention Center in Singapore.

Prior to the bout, Villanueva who hails from Midsayap, North Cotabato,was regarded as a very dangerous puncher having knocked out all but one of his 22 opponents.

The co-main event scheduled for 12 rounds for the IBO world featherweight title was highly anticipated to steal the show as it featured two warriors who were willing to leave it all out in the ring.

Yordan, who fights out of Ketapang, Indonesia, wasn’t fazed with his counterpart’s impressive record.

The 1st round was instant fireworks as Villanueva stormed out of the gates and immediately started throwing bombs. Working behind power shots instead of setting his offense up with jabs, Villanueva opted to make Yordan feel his strength early on as the Indonesian looked to box.

Villanueva threw wide, looping shots and looked oftentimes like he was over-extending himself, which in turn gave Yordan multiple opportunities to counter with combinations.

To Yordan’s credit, he never backed down from Villanueva, who seemed to rely solely on power alone and not on any tangible pugilistic skills.

Villanueva stalked Yordan as he tried to deliver a knockout blow, but the Indonesian displayed great defense as he was able to slip and duck most of the Filipino’s power punches.

Midway through the round however, Villanueva caught Yordan flush on the chin with a gorgeous left hook, sending his opponent crashing to the canvass.

Yordan beat the mandatory 8-count and was in disarray.

Smelling blood, Villanueva quickly jumped on Yordan with everything he had but to his dismay, Yordan was able to recover quickly and continued to box intelligently.

It was a terrible mismatch, as the skill level of both fighters was worlds apart and it was beginning to be painfully evident that Yordan was out-boxing and out-working the game Villanueva.

In the 2nd round, Yordan delivered  more clever counter-punching as he unleashed pinpoint combinations on a stationary Villanueva, who had little to no head movement.

A few moments into the round, Yordan caught Villanueva with a picture-perfect counter left, sending the pinoy crashing to the ring floor.

Scrambling and obviously still dizzy from the knockdown, Villanueva would go on to beat the count but it became apparent that he would not last much longer.

Yordan again caught Villanueva with another beautiful counter shot and this time, the referee waived off the bout, saving Villanueva on visibly shaky legs from any further punishment.

It was an impressive victory for Yordan, who himself lost to the main-eventer Chris John just last year. Yordan now becomes the new IBO Featherweight champion of the world.

Villanueva and his team is now sent spiraling back to the drawing board.

The young prospect has some serious pop in his fists but needs to back it up on a solid foundation of good boxing skills. He can no longer rely on power alone when fighting at the elite level.

In the main event, Chris John successfully defended his title against Japanese challenger Shoji Kimura via 12 round Unanimous Decision.

John was clearly the bigger, faster and stronger man. Behind a workman-like effort, John dominated Kimura with his technical superiority.