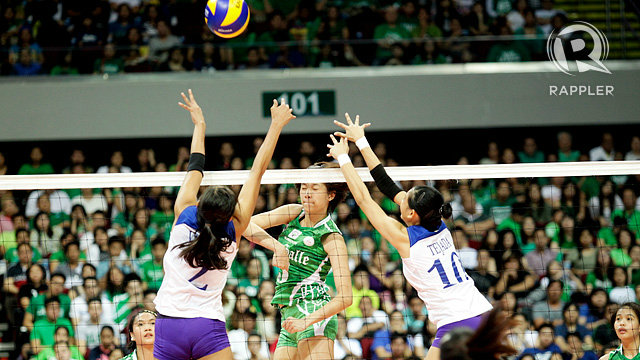 MANILA, Philippines – For a set De La Salle University came back to earth, but they recovered just in time as they nipped Far Eastern University, 25-11, 23-25, 25-20, 25-10 in the 76th UAAP Women’s Volleyball tournament, Wednesday, January 29, at The Arena in San Juan City.

The Lady Tamaraws dealt the defending champs its first set loss in the season but couldn’t pull through with the win as the Lady Spikers leaned on teamwork with six of their players scoring nine points or more.

Mika Reyes and Ara Galang flaunted their usual deadly form as they finished with 11 points apiece while Kim Fajardo added 10 markers of her own to keep La Salle’s record immaculate that now stands at 10-0. Denise Tan, Cyd Demecillo, and Abi Marano also pitched in 9 points apiece for the Lady Spikers.

DLSU put on a glitzy start as they sailed through the first set over the Lady Tams who are coming off a victory over University of the East in their last outing.

The upset-conscious FEU however, pulled off the improbable as they pulled the rug from under De La Salle, 25-23, thanks to a shaky endgame by the Taft Avenue side which was unable to close down the second frame despite leading by 22-20 at one point.

The Lady Tams then rode on their momentum as Geneveve Casugod and Mary Palma lifted FEU to a 16-12 lead but Fajardo and Marano sparked a 7-1 for La Salle to capture the third set 25-20.

FEU eventually lost steam in the fourth canto as they succumbed to errors as De La Salle finished off the Lady Tams, 25-10, with a 17-2 bomb.

Palma high-scored in the game with 12 markers while Casugod and Bernadette Pons added 10 and 9 but they did not get ample support from the rest of the Morayta crew who were stifled before the offensive-minded De La Salle squad.

FEU drops to 5-5 to join Adamson University at fourth place as a tough Final Four race towards the end of the eliminations loom.