May 9, 2012 9:46 AM PHT
Agence France-Presse
Facebook Twitter Copy URL
Copied
Novak Djokovic scraped and slid to an opening victory at the Madrid Masters. 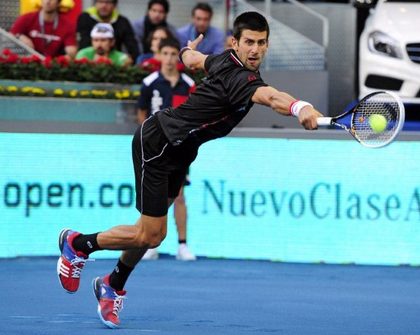 MADRID, Spain (AFP) – Novak Djokovic scraped and slid to an opening victory at the Madrid Masters on Tuesday, May 8 (Wednesday, May 9 in Manila), then let loose with a blistering appraisal of the event’s controversial blue clay courts.

“That was not tennis, either I need football shoes or some advice on how to play on this court,” said the Serb top seed after beating Spain’s number 137 Daniel Gimeno-Traver 6-2, 2-6, 6-3.

“I cannot find the words to describe this court. It’s really tough to play like this on a centre court.

“We cannot change anything this year, but my first impressions are not good. I don’t want to be the one complaining, but I say honestly what I feel.

“We need serious discussion about the future of this blue clay.”

The blue-clay plan was put into action by the tournament’s billionaire impresario Ion Tiriac, the man who brought catwalk models onto court as ball-girls in another experiment that has paid public relations dividends for the ATP-WTA Masters 1000.

But Djokovic says the differences with the red clay surface to which players are more accustomed are stark.

“This has no similarities with red clay, it’s totally different,” said Djokovic, winner of the 2011 edition over home hero Rafael Nadal. “It’s much more slippery.

“The material of blue clay and red clay are different. When you slide on red clay you can feel when you stop. Here you are always slipping.

“Most players I’ve spoken to share the opinion that the court is slippery.”

Djokovic said that even days of training made little difference. “Centre court is different from others I trained on. If it affects me next week in Rome, we will see.

“I don’t know how it will turn out in my next match. But I’m here to win. This is my work and I take things about this situation very seriously.”

Djokovic said the players were overlooked in the decision to trial the controversial material.

“Player opinions have to be heard and considered to understand what is going on in our tennis world. This event and the decision to change to blue is an example of players not being considered and heard.

“Their opinions are ignored. I hope this will change in the future.

“I’ve not found any woman or man who is enthusiastic about this surface. I haven’t heard any one say they like it.” – Scott Williams, Agence France-Presse