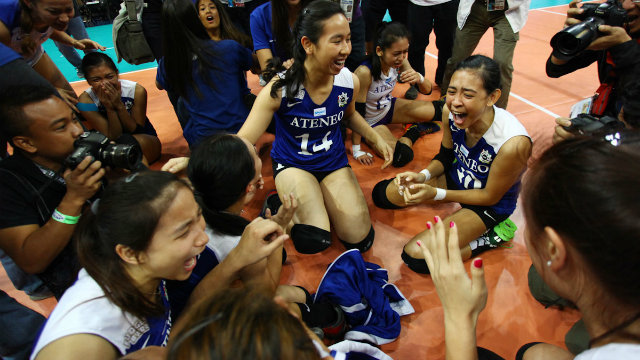 MANILA, Philippines – Depleted but not devastated.

Prior to their Season 76 title, Katipunan Avenue had never won a UAAP volleyball championship in either division – a distinction only owned by Ateneo until Saturday. Even Manila Central University, a UAAP team no more, had more volleyball titles than them.

Despite their storied brilliance in other sports –most notably in basketball – Ateneans had always thought that volleyball was never for them.

Then, in 2008, a shimmer of light glinted over there at Loyola. After hovering around the sixth to eighth spots since Season 56, a promising batch of Lady Eagles landed and brought with them the hope of turning things around for Ateneo’s volleyball program.

Although Ateneo failed to barge into the Final Four during the Fab Five’s maiden season, they became some of the most popular players during the the days when games were still played at the humid Far Eastern University gymnasium

A year later, in 2009, the Lady Eagles made their second trip to the playoffs only to fall to eventual champions University of Santo Tomas in the semifinals. Ferrer copped the Best Setter trophy while Ateneo took home its first UAAP Volleyball bronze medal – a first for the Katipunan crew.

The Lady Eagles went on to become regular fixtures in the UAAP Volleyball Final Four, gaining steam with each passing season.

In Season 74, Ateneo finally made its first-ever Finals appearance, finishing second after the eliminations to gain a twice-to-beat edge in the stepladder semifinals. They first got back on UST in the semis, beating them in four sets before winning Game 1 of the Finals in a comeback effort against the reigning champions De La Salle.

The Lady Spikers – who were anchored by Rookie of the Year and future Season 75 co-MVP Aby Marano, plus best server awardee and Marano’s co-MVP Ara Galang and best blocker Michelle Gumabao – proved to be too much for the jittery Lady Eagles side, however, as they bounced back in the next two games to capture their second title in as many years.

Volleyball reached its hey-day in Season 75 – and so did the Fab Five, who graduated at the conclusion of the season. From the San Juan Arena in previous years, games were also held at the more glamorous Smart Araneta Coliseum and the newly-opened Mall of Asia Arena. Capacity crowds filled stadiums to the rafters and the Ateneo-La Salle matches rivaled those of UAAP basketball and PBA in gate attendance. 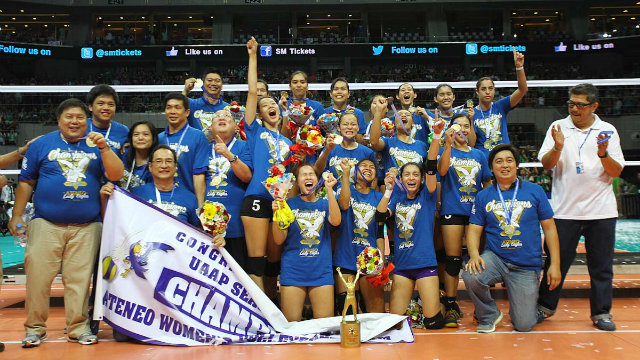 Ateneo finished second to De La Salle again in the preliminaries, winning 10 games and dropping four. Alyssa Valdez – who was then playing her second season for the Lady Eagles – made heads turn as she broke the UAAP scoring record, pouring in 35 markers on 31 attacks, three blocks, and an ace against Adamson University in the second round of eliminations. Ferrer, meanwhile, took the best setter trophy once more as she led Ateneo over the Lady Falcons in the semifinals.

Platoons of green and blue once again trooped to Cubao as La Salle faced Ateneo in the Finals. Gumabao put on a scintillating performance for the Lady Spikers to eventually win the Finals MVP award while season co-MVPs Galang and Marano were in their usual, lethal form to lead the Lady Spikers in a hotly-contested five-set Game 1 win.

La Salle went on to trump Ateneo in Game 2 at the Mall of Asia Arena, this time in straight sets, to put the Fab Five’s collegiate career to a screeching halt without a championship win.

The win brought Lady Spikers their three-peat, increasing their total to eight titles. They’d win 30 consecutive games before their streak came to an end, extending all the way to the end of the elimination round in Season 76.

For many, it meant the end of Ateneo’s dream of taking home that elusive women’s volleyball trophy, especially after Cainglet, Ho, Gervacio, Ferrer and Nacachi, together with head coach Roger Gorayeb, parted ways with the Lady Eagles after the season. It was a heart-breaking ending to a storybook beginning.

No Fab Five, no problem

Ateneo, now with Thai coach Anusorn Bundit at the helm, set modest goals for Season 76, hoping to make the Final Four. There was no plotting of vengeance, no talks of a championship. They simply wanted to recover after losing the core of their team.

After dropping their first game against the Lady Bulldogs, Ateneo won their next five outings before facing their familiar foes from La Salle, who were piling up win after win in the first round. Making matters worse for the Loyola-based side, their head coach was on an international assignment, coaching his homeland’s national youth team in a tournament.

The Lady Eagles lost both of their games against La Salle midway into the season and succumbed to NU once more in the second round. They finished the elims at 10-4, which was good for third place heading into the stepladder playoffs.

Ateneo faced a Bang Pineda-led Adamson Lady Falcons in the first rung of the stepladder. Pineda, who had put up a string of 20-point games towards the end of the eliminations, was Valdez’ closest rival for the league’s leading scorer plum and one of those in the running for the season MVP trophy. The Lady Eagles, however, pulled off just the right stops to edge AdU in a hard-earned straight sets victory.

Their nemeses were waiting for them in the semifinals, though, holding a twice-to-beat advantage against the Lady Eagles. Although they had never won against the Santiago sisters, Aiko Urdas, Mina Aganon, Myla Pablo and the rest of the Lady Bulldogs, Ateneo defied the odds to win two in a row and overcome their twice-to-beat handicap for the right to face their tormentors from previous years, De La Salle University.

Facing a huge thrice-to-beat disadvantage, nobody thought that Ateneo could overcome the odds. Even the Lady Eagles themselves probably had doubts along the way about their chances. As for their coach, heartstrong was their mantra and tough training was the key.

Having survived three knockout games in a row, Ateneo faces another one this time in the form of the four-peat seeking champions La Salle. The Lady Spikers have been brilliant all-year long, not dropping a single game since the first game of the last season. On paper, Taft Avenue seemed poised to win it outright, but matches aren’t won on paper.

The finals series was a chess battle between one of the winningest coaches in the country and a newcomer from Thailand. One squad had legitimate champions, the other was exhausted but unfazed. But in one of the most rousing upsets the league has seen in years, Ateneo managed to live another day after beating La Salle in four sets in Game 1.

Seeing their thrice-to-beat advantage vanish into thin air, De La Salle pulled one back and pocketed Game 2 in front of 17,000 fans at the Big Dome. Game 3, meanwhile, went the distance as Ateneo averted collapse and won the game in five sets.

Then history unfolded. It was simply all-Ateneo in the last game of the season. Valdez wrapped up her year with another MVP-performance, averaging close to 19 points per outing in the finals. Denden Lazaro lived off painkillers to take care of the Lady Eagles’ defense. Amy Ahomiro, Ella de Jesus, Michelle Morente and the rest of the squad stepped up whenever La Salle was attempting a comeback. Ateneo’s hard work bore fruit and their years of waiting finally ended.

Time and again, Ateneo proved pundits wrong. While their Fab Five era came to a close a season ago, it didn’t stop the rest of the Katipunan Avenue-based school from dreaming, fighting, and gunning for the top prize. The Lady Eagles lived up to their mantra and showed everyone what “heartstrong” really means. – Rappler.com