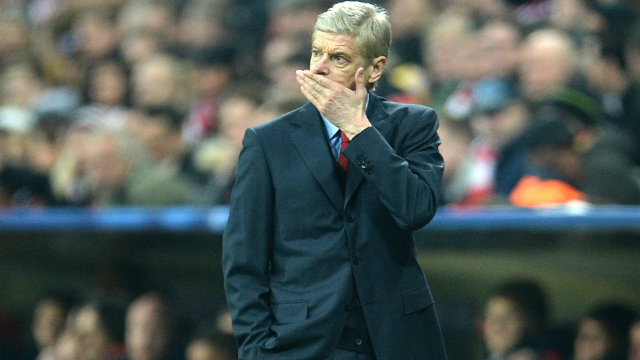 LONDON – Arsenal manager Arsene Wenger defended his side following comments by former Manchester United midfielder Paul Scholes that the Gunners are a “million miles away” from competing for the Premier League title.

And in midweek, when on the verge of a win at home to struggling Swansea, a late own-goal led instead to a 2-2 draw at the Emirates Stadium.

Scholes, now working as a television pundit, was severely critical of Arsenal’s performance against Swansea, saying they had “midfield players with no discipline” and adding “there are no leaders” at the north London club.

But despite those recent setbacks Arsenal are still just six points behind Chelsea with seven league games of the season remaining heading into Saturday’s match at home to title contenders Manchester City, three points off top spot with two games in hand.

And that is despite the side having been hit by injuries to key players such as Theo Walcott, Aaron Ramsey and Jack Wilshere.

“If six points (from the top) is a million miles away, then I don’t know what the translation from a mile into a point is,” Wenger said Friday.

“Everybody has opinions, people who have managed zero games have opinions and we have to accept that,” the veteran French boss added.

“What you live with is what you do on the pitch, and all the rest is only opinions.

“We are in a society where there are thousands of opinions every day, and some go for you and some go against you. You have to live with that.”

Wenger added: “We have not given up (on the title), believe me and we can show that on Saturday. It is our attitude that will decide that.

“Champions keep going when everybody else would give up. We have an opportunity to show that we have that mentality.”

Former England international Scholes also questioned whether Wilshere, currently sidelined with a broken foot suffered playing for England in a friendly against Denmark earlier this month, could reach the “next level”.

But Wenger responded by saying: “You cannot say that, Jack Wilshere is an exceptional player for me who has been handicapped by many injuries.

“Once Jack is back and consistently on the pitch, he will prove everybody wrong about that because he is an exceptional player — and Scholes knows that as well.”

Arsenal’s recent results have led to speculation they could be overtaken in fourth place by Everton, six points behind in fifth with a game in hand, and so miss out on a place in next season’s Champions League.

The Gunners travel to Everton’s Goodison Park next weekend and Wenger urged his side to maintain their self-belief.

“I believe that we have to keep going despite the past two negative results.

“If people say that Everton can catch us, that means we can catch the teams above us as well because they play against each other.

“It is the next game that is of course very important, and the next game is of massive importance because it is Man City and they fight at the top.

“They are the favorites with Chelsea and Liverpool, but when you play one of the favourites, you have an opportunity to shorten the distance to them.”

He added: “Let’s not forget we are in an important race in the Premier League, we are in the semi-final of the FA Cup, so it is at the moment not as doom and gloom as everybody paints the situation.” – Rappler.com