Eddiva to face Souza at UFC Fight Night 42 in Brazil 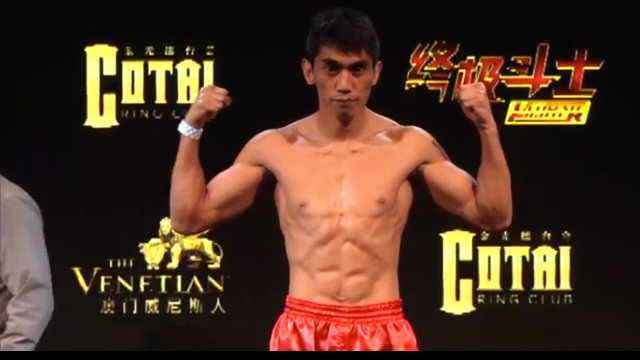 MANILA, Philippines – Team Lakay, the most renowned fight group in the Philippines, will be parading two of its top combatants at separate mixed martial arts (MMA) events in May.

Mark Eddiva, Team Lakay’s second representative in the Ultimate Fighting Championship (UFC), is set to return to action against Edimilson “Kevin” Souza in the preliminary card of UFC Fight Night 42, which is scheduled to happen at Ibirapuera Gymnasium in Sao Paulo, Brazil on May 31.

The 28-year-old Filipino (6-0) made his first Octagon appearance earlier this month in Macau and picked up a unanimous decision triumph over Jumabieke Tuerxun.

His three-round tussle with Tuerxun was the first time that he had to go the distance after five stoppages, four of which came in the first round.

On the other hand, Souza (14-3) had his UFC debut in September of last year when he outpointed Felipe Arantes via split decision at UFC Fight Night 28.

“Kevin” is a notorious Brazilian knockout artist as he thumped 12 of his 17 opponents with his deadly punching prowess.

“We have a very tough opponent in Souza. Mark is now fighting a diverse fighter in a different level. That’s why we’re focusing on numerous aspects of the game,” Team Lakay head coach Mark Sangiao stated.

Aside from Eddiva, Sangiao likewise confirmed that Eduard Folayang will slug it out with a yet-to-be-named opponent at ONE FC: Rise of Heroes, which takes place at the SM Mall of Asia Arena in Pasay City.

“Yes, he is scheduled to fight on May 2, but ONE Fighting Championship would like to keep it confidential first,” he said.

According to a close source inside the Baguio-based martial arts camp, former ONE FC lightweight champion Kotetsu Boku is the leading candidate to face the Philippine MMA frontrunner.

Three of the 36-year-old Japanese’s last five outings have been won by knockout, including a dominant title triumph over Zorobabel Moreira in October 2012.

Like Boku, Folayang (13-4) also put himself back into the winner’s circle after two-straight setbacks when he overwhelmed Vincent Latoel by unanimous decision at ONE FC: Moment of Truth this past December.

The 5-foot-9 highlander known as “Landslide” holds five wins by knockout and two submission victories to his credit.

Moreover, Folayang has faced and beaten top lightweights in Asia with the likes of Felipe Enomoto, A Sol Kwon and Vuyisile Colossa

Despite Team Lakay’s busy fight schedule competing in various promotions, Sangiao remains optimistic that Eddiva and Folayang will have their hands raised in victory.

“In Team Lakay, we always exert effort to help each other in our training camp. Even in my absence, all Lakay fighters take it upon themselves to contribute to the goal and in the preparation of every fighter,” the longtime mentor shared. – Rappler.com