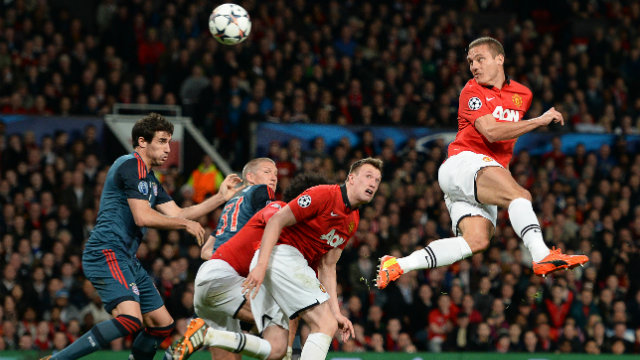 MANCHESTER, England – Under-performing Manchester United produced a vastly improved display to hold defending champions Bayern Munich to a 1-1 draw in the home leg of their Champions League quarterfinal on Tuesday.

Bayern midfielder Bastian Schweinsteiger cancelled out Nemanja Vidic’s opener, but was then sent off in the dying stages to give United extra hope ahead of next week’s return leg in Munich.

With Bayern having already successfully defended their Bundesliga title and United floundering domestically, the English champions were given little chance of success in the first leg, but they turned in a dogged performance on a night that stirred old passions at Old Trafford.

David Moyes’s side defended manfully and after Danny Welbeck had squandered a gilt-edged opportunity late in the first half, they took a 58th-minute lead through Inter Milan-bound captain Vidic.

“The players played really well, so we’re delighted, but just a bit disappointed that we conceded in the end,” said Moyes.

“We know we’ve got to score a goal in the second leg. We have to do something about it. But we know we’ve given ourselves a great opportunity.”

Ten points below the Premier League’s top four, United probably need to win the Champions League to qualify for next season’s competition, but their courageous display suggested that that may not be as fanciful a notion as previously thought.

The draw also prevented Bayern from setting a new Champions League record of eight successive away wins, but Pep Guardiola’s side will nonetheless be the favorites to progress ahead of the return game in Munich.

“I am quite satisfied. Manchester United has one of the best teams in the world,” said Guardiola.

“It is always dangerous when you go into the second leg with a 1-1 draw, but even a 2-1 victory would have been dangerous. We will try to win the second leg and I am sure we can do it.”

United set out to contain, with Michael Carrick, Marouane Fellaini and Ryan Giggs in central midfield, but they had the ball in Bayern’s net in the third minute.

Welbeck showed great skill to flick the ball over Javi Martinez and fire home, but because the Bayern defender lowered his head in the challenge, the United forward was penalised for a high foot.

Bit by bit, however, the visitors took control, with Franck Ribery putting a cross marginally too far behind Thomas Mueller and United goalkeeper David de Gea producing a flying save to thwart Arjen Robben.

The hosts spent most of the first half watching Bayern string passes across the face of their penalty area, but in the 40th minute they let a huge chance to take the lead go begging.

Jerome Boateng’s inability to cut out a through ball from Wayne Rooney left Welbeck one-on-one with Manuel Neuer, but he elected for a scooped finish that he miscued, allowing the Bayern goalkeeper to make a comfortable save.

Undaunted, United pressed on, with Antonio Valencia seeing a shot deflected over, and although Bayern enjoyed 78 percent of possession in the first half, the home side were holding their own.

United introduced Shinji Kagawa for Giggs at half-time and after Schweinsteiger had put a warning shot over De Gea’s bar, the hosts went ahead.

Rooney arced a corner towards the back post from the left flank and the unmarked Vidic strained his neck to steer the ball into the bottom-right corner with the side of his head.

Guardiola responded by introducing Mario Mandzukic for Mueller and the move paid swift dividends, with the Croatian heading down Rafinha’s cross for Schweinsteiger to crash an equalizer into the top-left corner.

An injury to Alexander Buttner then forced United into a defensive reshuffle, but although Robben twice went close in the latter stages, Moyes’s side held firm.

Schweinsteiger was shown a second yellow card in the last minute after sliding in on Rooney and Guardiola will also be without Martinez in the second leg after he was booked for a foul on Javier Hernandez. – Rappler.com