Apr 2, 2014 3:35 PM PHT
Rappler.com
Facebook Twitter Copy URL
Copied
The Philippine boys’ squad eked out contrasting results on opening day, winning their first match against Nicaragua, 1-0, only to drop a 0-4 game to Burundi in the afternoon in the 2014 Street Child World Cup 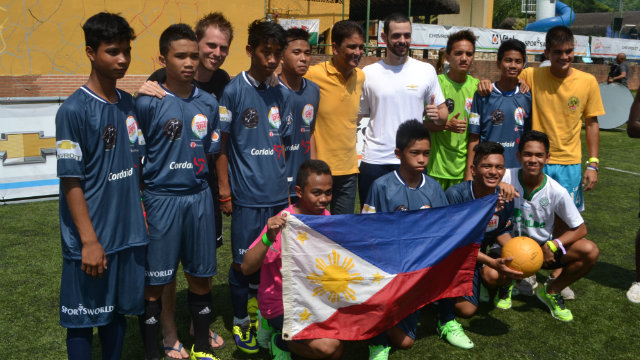 MANILA, Philippines – The Philippine boys’ squad eked out contrasting results on opening day, winning their first match against Nicaragua, 1-0, only to drop a 0-4 game to Burundi in the afternoon in the 2014 Street Child World Cup, Wednesday, April 2, in Rio de Janeiro in Brazil.

Against Nicaragua, Gawad Kalinga’s Kennneth proved to be the difference for the Philippines as he pounced on the loose ball off teammates’ Joseph’s flubbed attempt, hitting the lone goal of the match that propelled the only Asian side in Group 2 to a close 1-nil win.

The Man of the Match plum, however, belonged to Philippines’ goalkeeper Benjamin after he pulled off crucial stops to keep Nicaragua at bay and protect their slim lead until the final whistle.

The Philippines’ celebration was short-lived though as they succumbed to the bigger and more physical Burundi side in the afternoon, simply lacking the height and heft to stop their African counterparts from capitalizing on aerial plays.

“It was a mixed start to the group stage for us but still one to be proud of,” Team Leader and Head Coach Roy Moore said after the game.

“We have our first three points of the campaign and it puts our destiny in our own hands as despite the loss to Burundi, who will most likely win the group, Tanzania and Argentina will be close but winnable games.”

Despite the loss, morale is high inside the Philippine camp as they could still see themselves qualify to the quarterfinals if they put up good results in their last two group games against Tanzania and Argentina.

Tanzania is currently perched on top of Group 2 with seven points while Burundi trails at four points with still a match at hand. The Philippines – which is backed by Cordaid and Globe – is at third with three points off their win over Nicaragua.

Their girls’ counterparts earlier demolished South Africa, 9-0, to kick-off their campaign in the 19-nation tournament.

The Philippines delegation to this year’s Street Child World Cup is comprised of 14 to 16-year-old street kids – including orphans and thrash scavengers – from some of the most impoverished communities in the country. The team accepts donations through its web page www.justgiving.com/Fairplay-For-All-Foundation as they continue their cause in the world stage. – Rappler.com