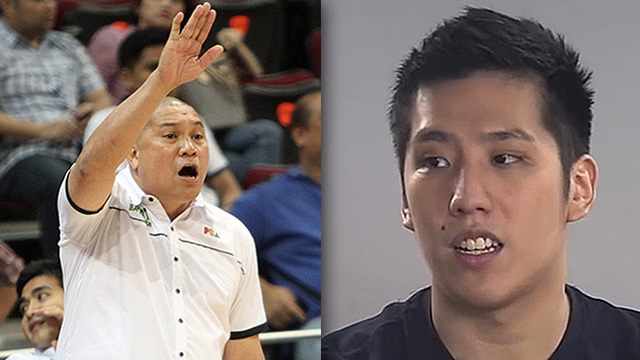 MANILA, Philippines – There was a time when coach Alfredo “Pido” Jarencio and Jeric Teng were fighting to fulfill one dream, side by side. They donned uniforms of the same hue and logo. They also stayed on the same bench.

They’re still fighting for the same dream; just not on the same team. The achievement of their goals will have to come at the expense of the other.

In a different league and playing on another level of hoops, Jarencio and Teng are still chasing a championship.

But much like their days in the University Athletic Association of the Philippines (UAAP), the struggles have not left either Teng or Jarencio.

The beloved former University of Santo Tomas Growling Tigers head coach is still on the hunt for his first PBA victory in the 2014 Commissioner’s Cup. His new team, GlobalPort Batang Pier, remains the only winless team in 7 games and is sitting at the bottom of the standings.

The piling losses have raised doubts on the capabilities of the fiery coach, who has been well acquainted with criticism since his days in the UAAP. But just like in those days, Jarencio has an equal number of believers on his side.

One of them is his former player Teng, who now plays for the Rain or Shine Elasto Painters.

“I have so much faith in coach Pido,” Teng offered, when asked about Jarencio’s struggles so far in the PBA.

The 23-year old shooting guard wrapped up his UAAP stint in 2013 after a heartbreaking Finals loss to the De La Salle Green Archers. He was drafted 12th overall by Rain or Shine during last year’s PBA Rookie Draft.

The former King Tiger and the former Tigers coach met for the first time as opponents on Monday, March 31 when Rain or Shine dealt the Batang Pier its 7th straight loss in dominant fashion. Teng said he and Jarencio shared a few laughs and talked prior to the game.

(It’s weird because he’s always on my side, we’re always on the same bench. But this time we’re on opposite benches. But I’m happy that coach Pido is a head coach in the PBA. And he really deserves it. I’m happy to compete with him.)

These setbacks are not too different from the ones Jarencio had to endure during his last two seasons with the Tigers. They fell short in the Finals twice against the Ateneo Blue Eagles and the Green Archers as Jarencio failed to provide the follow-up title to his maiden season championship in Season 69.

Jarencio, 49, made the jump to the professional ranks in January after agreeing on a two-year term with GlobalPort – a young team seeking to prove its mettle against established franchises. (READ: End of an era: Pido Jarencio leaves UST, moves to Globalport)

Adapting to the system

Jarencio’s present dilemma revolves around dealing with changes in a short amount of time.

GlobalPort, a team anchored by rookies, is currently trying to adapt to Jarencio’s new system, which Teng quickly affirmed is difficult to get used to.

(Yes at first. It is quite difficult because there’s plenty of ball movement. He wants to avoid one on one plays. All players need to hold the ball to encourage them to play defense.)

Teng believes all GlobalPort needs is time and to “believe in the system” until the team clicks with it.

“Kasi yung system ni coach Pido, it will really take time. Pero once you get it, talagang tuloy tuloy na. I think the team is nasa adjustment stage pa lang sila eh. Once they get the system, once they start believing in the system, good things will happen to the team.”

(Coach Pido’s system will really take time. But once you get it, it gets easier from there. I think the team is still on the adjustment stage.)

Asked if he recognizes Jarencio’s system from his vantage point at Rain or Shine, Teng was confident with his answer.

“Coach Pido has the same plays. Medyo alam ko nga yung ibang play na ginagawa nila.” (I know some of the plays he does.)

That recognition, in fact, became his own weapon against his former coach during Monday’s match-up, where he played for 8 minutes.

(Actually it helped on defense because I know when the screen will come and where it will happen. But even if you know coach Pido’s plays, he still has a back-up. Just because you know it doesn’t mean you can stop it. He has a lot of options.)

For his part, Jarencio is opting to look at the brighter side of their losses. He says his team is missing small but very crucial things such as playing smart during crunch time and staying consistent. And while GlobalPort still hasn’t realized its identity yet, Jarencio is certain they’re on the right path.

Despite the elusive win he has yet to pin down, Jarencio still came out beaming from the GlobalPort locker room on Monday night.

Meanwhile, Teng also had his fair share of struggles with another heartbreak from his third consecutive major championship loss. During his first Philippine Cup conference right out of college and the recent UAAP season loss, Rain or Shine absorbed a tough Finals loss to San Mig Super Coffee.

There’s also the ongoing battle to prove himself as a legitimate PBA player. It’s still too early to say how far the former King Tiger can go in professional basketball, but Jarencio is returning the faith Teng gave him.

Jarencio and Teng may no longer work together in the same huddle, plan the same plays, or yell the same “Go UST” cheer. Things may have changed, but they still have each other’s back – at least metaphorically.

“Oo, akala ko nandito pa siya (Jarencio)!” Teng remarked laughing and pointing behind him as if he was on the sidelines. “Yun pala nasa kabilang bench na.”

(Yes! I thought he was still behind me. But he’s already on the opponent’s bench.) – Rappler.com