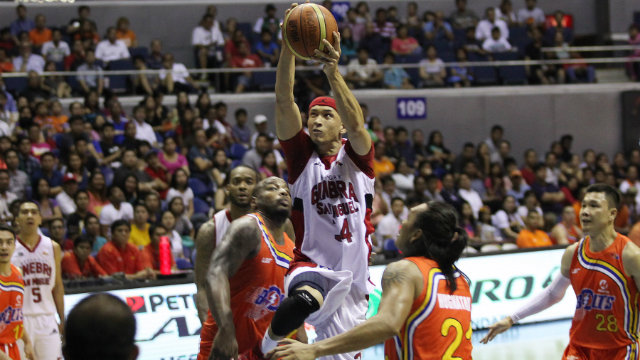 Barangay Ginebra San Miguel pushed back against their pressure and struggles to trump the Meralco Bolts, 88-78, on Wednesday, April 2 in the PLDT Home TVolution Commissioner’s Cup at the Smart Araneta Coliseum.

The Kings banked on a mighty stand in the fourth period, using a sizzling 8-0 run sparked by a Mark Caguioa three-pointer to create some much needed separation against an equally fiery Bolts, 79-70.

They continued down the road they paved with Chris Ellis delivering the dagger triple with 1:15 left to play, 83-73. Not content with that, and perhaps out of frustration from their two-game skid, Ellis pounded the nail on the coffin deeper with another trey to make it 86-73 with 46.8 ticks remaining as Ginebra cruised on to victory and a 3-4 slate.

It was a combination of many things for Ginebra. But mostly, it was the very thing veteran Caguioa had wanted to see from his teammates: heaps of intensity.

The defensive energy was just palpable for Ginebra for much of the ballgame as they scrambled for loose balls and never gave up on seemingly impossible plays. They played honest defense, protected the rim with 6 blocks and was much more fluid with their offensive sets as well.

Ginebra played one of their best first halves of the conference, spinning the thread of their offense to produce plenty of gold in a 54.8% field goal shooting clip good for a 44-40 halftime lead.

The Gin Kings faltered in the third, however, as their ball movement and aggressiveness dipped, allowing Meralco to pick up some steam and even take over the driver’s seat at several junctures.

Josh Urbiztondo, though, came alive towards the end of the third with a trey from way out to break the deadlock and enter the deciding canto with a 63-60 advantage.

Knowing the importance of the game, both teams’ new imports piled on the intensity in the third and fourth periods, taking it strong to the hole and challenging every sort of defense put up by their opponents.

Darnell Jackson, 28, who replaced Brian Butch, did not waste any time showcasing his athleticism and his fearlessness as he scored in every way he could – be it from deep underneath the ring or in transition for the throwdown. He finished with 25 markers, 18 rebounds, an assist, a steal and a block.

While Gary David added 18 points on 7-of-7 free throws for Meralco, who dropped to 3-4.

Agustin noted the performance of his new import who replaced Leon Rodgers, former Los Angeles Laker Josh Powell. He went across the board with 16 points, 15 rebounds (6 on the offensive glass), two assists, two steals an two blocks.

Playmaker LA Tenorio also looked much like his old self in this game with 10 points, 5 rebounds, 6 assists and two steals.

Ellis finished with 16 points for Ginebra as Greg Slaughter and Caguioa chipped in 15 and 13 points, respectively.