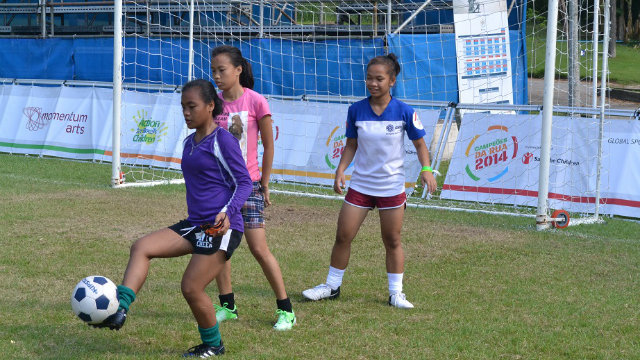 MANILA, Philippines – The Philippine girls’ team are looking bright on Day 2 after they followed up their big opening day win with a 3-1 result over El Salvador to take the top spot in Group 2 in the Street Child World Cup in Rio de Janeiro, Brazil.

After walloping South Africa two days ago in a 9-nil rout, the Philippines – comprised of street children from some of the poorest communities in the country – secured their spot in the quarterfinals as three players found the back of the net for the Filipinas Thursday, April 3.

Davao’s Agot scored her fifth goal in two games as she put the Philippines on top, launching one from free kick that hit the bar and bounced across the line for 1-nil.

The Philippines then doubled its lead after pulling off a neat string of passes, leading to Angelica’s late first half goal.

Down by two goals, El Salvador entered the second half with a sense of urgency as they pressured the Philippines all-game long and got rewarded with a goal off a free kick.

Ronalyn, however, wrapped up the match as she scored the insurance goal to secure a 3-1 triumph for the Philippine side.

(Our game was alright. Even though we panicked after El Salvador scored, we were able to regain our focus.)

The win will send the Philippines to either the top or second spot in the next round depending on the result of hosts Brazil’s game against Zimbabwe tomorrow.

Meanwhile, the Philippines’ boys’ team will play an all-important match tomorrow against Tanzania before taking on powerhouse Argentina as they try to qualify to the next stage after a mixed result in their opening day games yesterday.

You can support Team Philippines and help build sustainable projects to stop child labour and help children off the streets by donating on Fair Play For All Foundation’s web page www.justgiving.com/Fairplay-For-All-Foundation.