V-League: Arellano, Adamson go 1-2 in Group A after wins 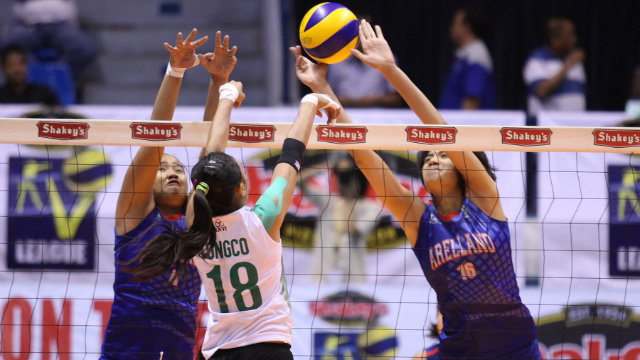 Still fresh from a colossal upset against Ateneo de Manila last Sunday, the Lady Chiefs banked on the scoring of Prado and Danna Henson who combined for 25 points on 21 attacks in a win that pushed Arellano on top of Group A standings at 3-0.

The unbeaten squad started flat in sets one and two, but with the duo firing spikes at will, the Recto-based crew managed to bag the first two frames.

In the third set, Arellano’s solid coverage helped them reach an 8-2 start. The Lady Blazers managed to trim the gap down to three at 11-14 with a little help from their opponent’s errors, but that was the closest they could get as Henson and Prado once again conspired to bring the lead up to 22-14 and eventually hand Arellano the victory.

“The win against Ateneo is a big confidence booster. But I told my players winning against a champion team doesn’t mean anything; we still have to practice,” said Javier, who says there are still things to improve on.

“We still have to take care of other aspects of our game, like performances from our middle hitters.”

The Lady Blazers meanwhile fell to 1-1.

Adamson shuts down Southwestern U

In the opener, Adamson University once again showcased a total team effort to pull off a 25-12, 25-14, 25-16 straight sets win over Southwestern University.

Eleven players scored for the Lady Falcons with only Mylene Paat scoring in twin digits with 10 points, while Patcharee Sangmuang and Jessica Galanza added 9 and 8, respectively. Coach Sherwin Meneses’ troops raced to 2-1 in Group A good enough for solo 2nd.

The Lady Cobras meanwhile dropped to 1-3 and will face the Ateneo Lady Eagles on Sunday.