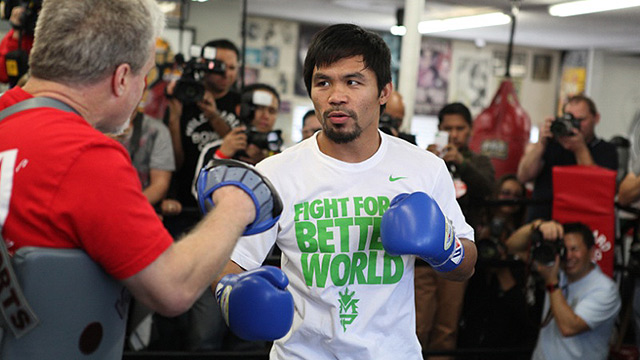 LOS ANGELES, Calif. – Manny Pacquiao opened the doors to his training camp at the Wild Card Gym in Los Angeles on Wednesday afternoon for a media workout. Pacquiao (55-3-2, 38 knockouts) of General Santos City, Philippines hit punch mitts and the double-end bag alongside trainer Freddie Roach during the light-hearted exhibition, which was attended by dozens of media outlets.

Pacquiao, 35, will face WBO champion Timothy Bradley (31-0, 12 KOs) on April 12 at the MGM Grand in Las Vegas, Nev. The two first met in 2012, when Bradley won a controversial split-decision when most felt Pacquiao deserved a wide verdict.

Since then, Bradley has made two defenses of his title in bruising decision wins over Ruslan Provodnikov and Juan Manuel Marquez, while Pacquiao was knocked out in six by Marquez before rebounding with a win over former lightweight titleholder Brandon Rios.