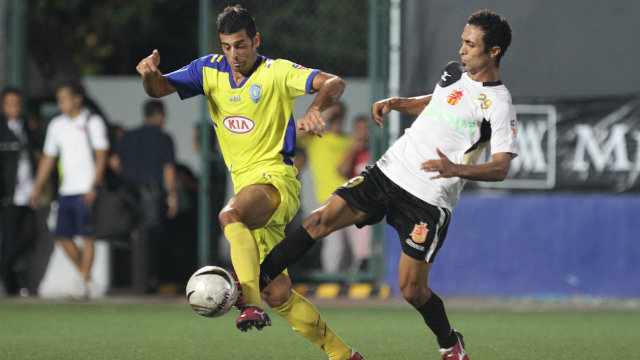 MANILA, Philippines – This year’s title race took another wild turn after Stallion FC held the league-leading Global FC to a 3-3 draw in the 2014 United Football League, Thursday, April 3, at the Emperador Stadium in Taguig City.

The reigning league titlists – who also drew their last two games – thwarted Global’s plans of breaking away from Loyola and Kaya in the title race as they came back from two goals down to put Leigh Manson’s five-game winning streak to a screeching halt.

In a battle between the last two league champions, Global took the lead first as Daisuke Sato headed in Milad Behgandom’s miss in the 43rd minute to lead Stallion by 1-nil at the break.

Behgandom then made up for his near-miss moments after halftime as he evaded several Stallion defenders and drilled in Global’s second goal, 49 minutes into the night.

Down by two goals, Ernie Nierras’ crew did not wither under pressure as Fitch Arboleda and Naser Dourudian put Stallion back into the game with goals in the 59th and 62nd minute.

Global’s Iranian striker Behgandom, however, reclaimed the lead for the 2012 champs as he netted in his second goal in the 70th minute.

With the clock ticking away, Ruben Doctora then pinched in the late equalizer, driving the ball into the bottom corner for 3-all with 11 minutes left in regulation.

Even with the draw, Global still improves to 38 points and gains a five-point cushion over second placers Loyola and Kaya.

Stallion, on the other hand, is at a distant fourth place with 24 points after 16 games this season.

In the night’s curtain-raiser, Pasargad dropped its sixth straight game after Philippine Army – GTI FC ran away with a 2-1 win that brought the Troopers back to the sixth position.

Jeon Shin Seok put Army on top 29 minutes into the game as he connected well with compatriot Choi Young Ok, banking in the opening goal easily from point blank.

Song Woo then doubled their lead in the 38th as he headed the ball in past the PSG keeper for 2-nil, but Hamed Fateh answered back just three minutes later as he drilled in a composed penalty shot after Ed Gempisaw’s foul inside the box.

Seo Seung, who replaced Ed Sacapano between the sticks for Army, almost gifted Pasargad the equalizer in the 82nd when his clearance hit Jerome Cuyos and rebounded into the back of the net. The officials, however, were quick to scratch off the goal as the Pasargad forward used his hand to direct the ball between the posts.

Army improves to 17 points to overtake Pachanga Diliman for the sixth position while Pasargad remains dead last with only four points to show in their 14 outings.

Army faces Loyola next on April 3 while Pasargad returns to action on April 7 against Team Socceroo. Stallion, meanwhile, takes on Kaya on April 8 with Global squaring off also with Kaya on April 12. – Rappler.com