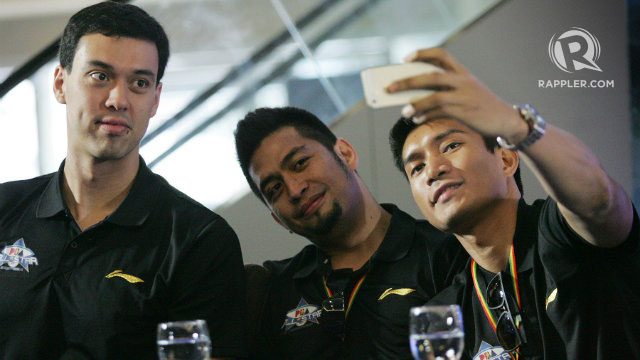 Facebook Twitter Copy URL
Copied
The PBA All Stars and Gilas Pilipinas members were all smiles at Thursday's press conference, but the mood will turn serious when they meet again on Sunday

MANILA, Philippines – Participants of the annual PBA All Star Weekend entered the Coral Way lobby of the Mall of Asia Arena on the noon of Thursday, April 3 clad in black, flashing smiles, and fresh from a motorcade from Solaire Resort.

All were in a casual, jolly mood while preparing for their press conference. The exchange of thoughts was light as players shared their ideas on the upcoming activities. Some even cracked jokes, like the always flashy Willie Miller, Joe Devance, and Marc Pingris, making the presser a fun sight to see.

This atmosphere however, will turn into a serious battleground once the PBA All Stars battle the Gilas Pilipinas national squad on Sunday, April 6 in the culminating event of the four-day spectacle.

Winningest PBA mentor and San Mig Coffee head coach Tim Cone is elated to call the shots for the all-star selection this year; he says his boys are armed with two goals: the first is to do their best for the fans, and the other is to get Gilas Pilipinas better by showing their best performance.

“I’m thrilled to be with these young men. Our team is here for the fans and we’re also for Gilas,” said Cone.

But Cone knows the national crew is much improved a year removed from their first match up with the PBA selection. Plus, Marcus Douthit and Jimmy Alapag, who both didn’t suit up last year, will be in action on Sunday.

“I think Gilas will be a lot better this year. We will try to compete and challenge them. We want a tough defensive battle.”

Asked about the offense he will run for the team, the Mixers mentor said he spoke to the Gilas coaching staff and will most likely infuse his triangle with the European brand of play to make it a simulation of what Gilas will experience in the FIBA World Cup.

“We discussed a few things (with Chot Reyes) so probably they will see some European stuff and triangle stuff,” he said.

For the fans, country

PBA Philippine Cup Finals MVP Mark Barroca likewise wants to give the national team a good test. A former Smart Gilas member himself, the 5-foot-9 point guard will have his hands full against Jayson Castro, LA Tenorio, and Jimmy Alapag.

(Of course we want to challenge Gilas. We want a fun game for the fans but at the same time, we want to help Gilas improve)

Mac Baracael, also a part of the original cast of Gilas Pilipinas, and James Yap of the 2009 Powerade Team Pilipinas, share the same sentiments. They also mentioned the all-star game will be serious as they want the best for the national team.

Pressure is on for nationals

While the PBA All Stars are expected to give their best, the pressure is twice as huge for the members of the national squad. 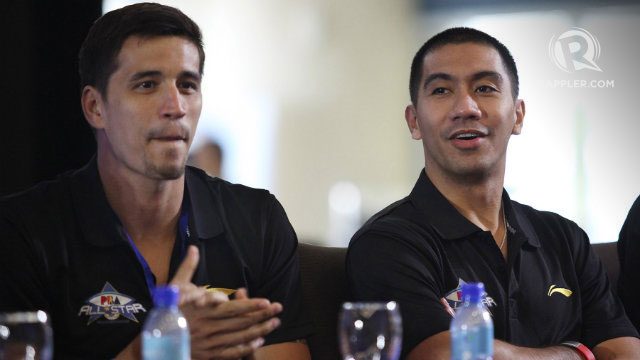 Gilas forward Ranidel De Ocampo knows most of the PBA All Stars have already represented the nation, and he expects a tough affair. But at the end of the day, he wants the fans to enjoy.

“Sana maraming manood. Yung PBA All Stars deserving din maglaro sa national team. San mapasaya namin ang mga tao,” said the native of Tanza, Cavite. (I wish there will be a good turnout; the all stars also deserve to be in the national team so I hope we can give joy to the fans)

Marc Pingris meanwhile thinks the spotlight shall focus on how well they can perform on Sunday. It is their first tune-up in a long while, adding more pressure to the lineup.

“Gusto naming manalo. May pressure sa amin. Kapag natalo kami, pagagalitan kami ni coach (Chot Reyes),” said the 2013 Governor’s Cup Finals MVP. (We want to win because the pressure is on us. If we lose, we’ll hear it from coach Chot Reyes)

The Gilas Pilipinas-PBA All Star showdown takes place on Sunday, April 6 at the Mall of Asia Arena. Ticket prices range from 375 to 1,550 pesos. – Rappler.com

More about the PBA All-Star weekend

Larry Fonacier plays down his chances at 3-point shootout