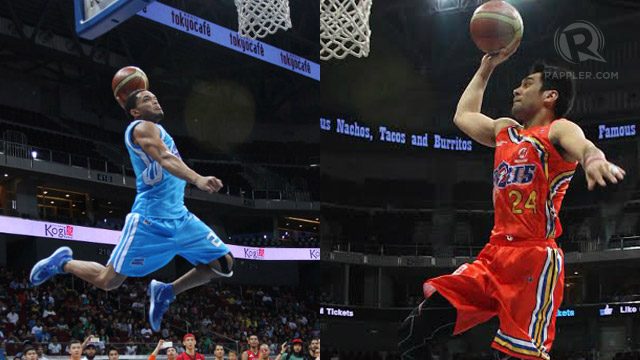 Facebook Twitter Copy URL
Copied
One new dunk champion was not enough. There was so much high-flying talent in this year's PBA All-Stars slam dunk competition that the judges couldn’t give just one man the title.

MANILA, Philippines – One new dunk champion was not enough. There was so much high-flying talent in this year’s PBA All-Stars slam dunk competition that the judges couldn’t give just one man the title.

Justin Melton of the San Mig Super Coffee Mixers and Rey Guevarra of the Meralco Bolts were named slam dunk co-champions on Friday, April 4 at the Mall of Asia Arena.

The competition was so stiff between the two that their finals round extended to a second round as they both tallied a perfect 40 points for each of the two rounds.

Guevarra was dominant from the get-go with a between the legs jam to gain a perfect score from all the judges for 40 points in the first round.

His second round reverse throwdown from the baseline earned him 39 points.

In the final rounds Guevarra made good on a double pump which he finished on a reverse, followed by a spin move to the basket as he slammed it home.

Meanwhile, the 5-foot-10 Melton impressed the crowd and the judges repeatedly as he soared high above the rim for thunderous dunks. The San Mig Coffee rookie showcased a lot of his athleticism and his hang time before the eager crowd and fellow players as he jumped over two people in the first round for a perfect 40 points.

He then used the ring for the assist, hanging with his left hand and dunking it with authority to gain 39 points.

In the finals he made an alley-oop to himself for the reverse, before completing a one-handed tomahawk.

“No intimidation,” Melton said of how he felt going up against much taller competition. “Just go out and do what you do, have fun with it.”

It may have also helped Melton to have his coach Tim Cone send him off and veteran teammates PJ Simon and Mark Barroca offer suggestions as to what he should do.

“My coach told me in practice today to just go out and have fun so that’s what I did,” he said. “My teammates definitely helped out with suggestions and all that. Mark and PJ were just sitting here on the sidelines.”

Guevarra and Melton ousted last year’s champion Chris “Air Force” Ellis, who tallied 37 points in the first round after enlisting the help of multiple-time slam dunk champion KG Canaleta for a dunk over him. In the second round, the high flying shooting guard switched from his right hand to finish on the left for 33 points.

Only the top two scorers from the eliminations round advanced to the final round. The slam dunk competition was judged by Atoy Co, Barry Pascua, Bogs Adornado, and Ramon Bautista.

Meanwhile, other highlights of the slam dunk contest included Cliff Hodge trying to pull off a dunk over 3 people. Hodge asked his teammates Gary David, John Wilson and Guevarra to be his personal obstacle course to the rim. Hodge’s attempt at overachieving left Wilson taking a selfie underneath the ring and David praying for his life.

Ginebra big man Japeth Aguilar also tried something unique with teammate LA Tenorio holding a camera underneath the ring and holding the ball for Aguilar to take. However, Aguilar could not complete the dunk as well.

Below is a complete list of scores from the slam dunk competition.