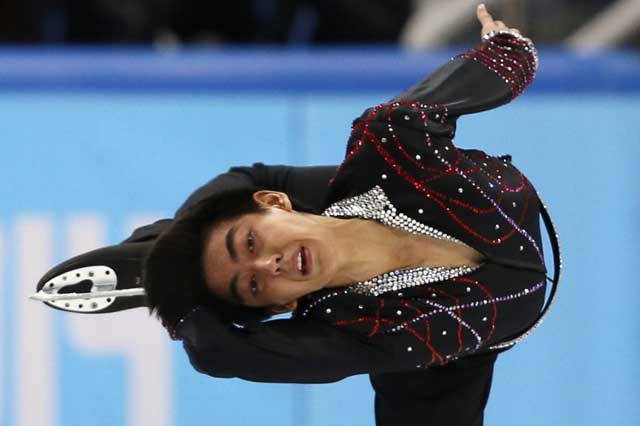 MANILA, Philippines – Filipino figure skater Michael Christian Martinez is off to a hot start in the Triglav Trophy International Figure Skating Tournament in Jesenice, Slovenia after topscoring the 7-man field after the short program competition on Friday, April 5 (Manila time).

The 17-year-old Paranaque native scored 63.29 points (33.86 techical score + 29.43 component score) to gain the No. 1 ranking after the short program routine in the senior men’s category – a big lead heading into the free skate finale.

In second place so far is Japan’s Kenji Tanaka who got 63.08 from the judges while Great Britain’s Phillip Harris is third with 60.66

Martinez, the first Southeast-Asian figure skater to participate in the Winter Olympics, will have a big chance to win it all when they resume action in the finals on April 6 (local time in Slovenia).

Filipino-American Samantha Cabiles meanwhile is in 6th spot among 22 participants in the junior women’s short program, wounding up with a total of 36.96 (19.5 technical score + 17.46 component score).

In the top place is Kazakhstan’s Yelizabet Tursynbayeva who has 48.97 points across her name, followed by Alissa Scheidt of Germany in distant second place with 41.36 points and Juni Mari Benjaminsen of Norway with 40.15.

The Philippine Skating Union (PSU), a member of the International Skating Union (ISU) sent Martinez and Cabiles to represent the nation in the Triglav Trophy this year.

Cabiles can shoot for a medal in the free skate competition on April 5 (local time in Slovenia). – Rappler.com