Ateneo downs Lady Cobras to bounce back in V-League 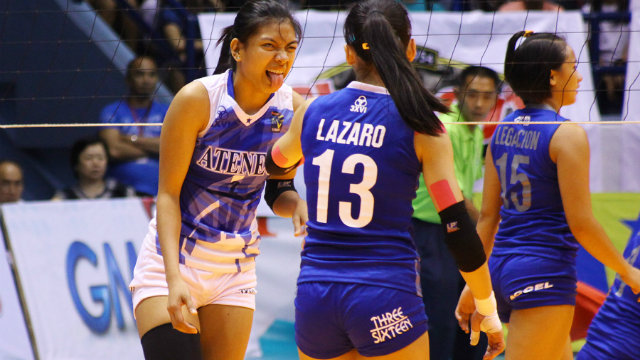 The reigning UAAP champions bounced back from a shock defeat to Arellano University in their last outing as they clobbered the Cebu-based crew to improve their record to 2-1 and tie Adamson University in Group A’s second spot.

Amy Ahomiro top scored with 13 markers while Kassandra Gequillana and Michelle Morente added nine points apiece as they sent SWU to 1-4 in what was a one-sided weekend affair.

Ateneo sprinted early to control the game as they erected a ten-point cushion in the opening frame to take the set unopposed, 25-13.

Southwestern tried to bite back in the second set as they put up a mini-spurt midway in the canto but the Katipunan Avenue-based side proved to be too good for them, securing a  25-18 set win for a 2-0 lead.

With the win already in their pockets, Ateneo then played SWU in the third set with Alyssa Valdez on the sidelines but the Lady Cobras still couldn’t eke out a decent performance as they handed the Lady Eagles an easy straight sets win.

SWU, on the other hand, was totally shut down this afternoon as no Lady Cobra scored five points or more with Loida Abellana finishing with a team-high four markers.

But it was Southwestern’s 29 errors that made matters worse for coach Jordan Paca as they failed to capitalize on Ateneo’s likewise erratic outing.

The Lady Chiefs are perched on top of Group A with three wins in as many games with Adamson and Ateneo trailing on identical 2-1 slates.

The Lady Eagles face College of St. Benilde next on April 20 as Southwestern completes their run in the Group A preliminaries with one win in five matches.