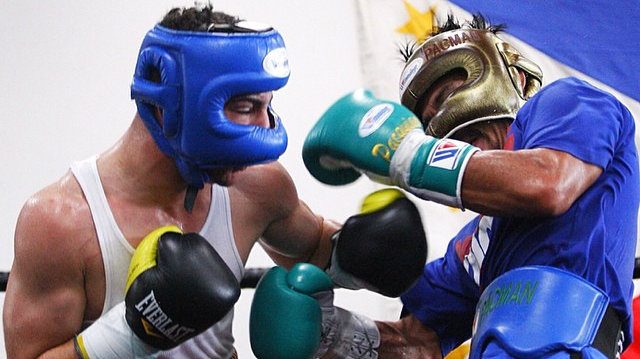 Facebook Twitter Copy URL
Copied
Sparring with Manny Pacquiao is no light assignment, but Julian Rodriguez stepped up in a big way to help Pacquiao prepare for his rematch with Bradley

MANILA, Philippines – For 19-year-old Julian Rodriguez, relocating from his native New Jersey to the Wild Card Gym in the heart of Hollywood was a culture shock. After all, he isn’t likely to run into Bob Dylan or Aaron Eckhart at his gym in Paterson, N.J.

Rodriguez has spent the last month at the Wild Card as one of Manny Pacquiao’s sparring partners, helping the eight-division champion prepare for his April 12 rematch with Timothy Bradley in Las Vegas and is set to return home to New Jersey once camp breaks on Tuesday.

“One day after training, I asked Manny where I can buy the shoes he had on,” began the junior welterweight prospect Rodriguez, whose record is 3-0 (2 knockouts). “They were red and blue and they matched my outfit for my upcoming fight perfectly. He told me that he got those custom made and that they don’t sell them anywhere.”

“I was bummed out about it, but then he asked me what size I was. I told him I was a 9, and next thing I know, he took the shoes right off of his feet and gave them to me.

“He’s one of the nicest guys I’ve ever met. He treats me like I’m apart of his family, and I’ve only been here for a couple of weeks.”

These kinds of experiences were typical for Rodriguez, a 2012 National Golden Gloves champion and U.S. Olympic alternate, during his tenure with Pacquiao. Rodriguez, who joined former IBF junior lightweight titleholder Steve Forbes and unbeaten prospect Lydell Rhodes as sparring partners.

Rodriguez recalls the conversation he had immediately after their first encounter in the gym. “He asked me how old I was and once I told him I was only 19, he was really surprised,” said Rodriguez. “He told me that I’m very good and could have a long great career ahead of me as long as I stay focused.

“The work is amazing. Everybody is always at the edge of their seat when Manny and I spar. We ended up sparring a total of about 8 or 9 times. I definitely give it my best in there and I believe he’s going to win his next fight by a KO.”

When asked to expound on why he felt so confident about Pacquiao’s chances at revenge in his second outing with Pacquiao, Rodriguez responded: “(Manny) just has to listen to the game plan. I’ve been watching the techniques Freddie (Roach) and Manny are practicing and Manny seems to have perfected them. Can’t wait to see the fight.

“To be honest, I don’t think Bradley’s skills are dangerous. “The only way I think Bradley can make it a tough fight, is if he makes it an ugly/sloppy fight. If Bradley tries to exchange with Manny, Manny will cut him up. Manny is too sharp for Bradley.”

Rodriguez’s next outing is scheduled for April 19 in Orlando, Fla., against Luis Santiago. While Rodriguez has never seen footage of his Puerto Rican foe, it’s unlikely he’ll have as much fire power as the Pacman.

“I’ve always been confident because of my skills and work ethic, but after being around Manny, and having him personally tell me how good I am, my confidence level increased dramatically,” said Rodriguez. “I’ll always be humble, but I’m taking in every positive thing Freddie and Manny told me and using it as motivation.” – Rappler.com