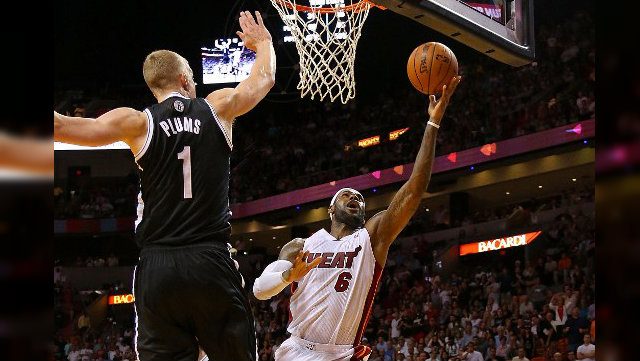 MIAMI, USA – Mason Plumlee denied LeBron James a dunk as time expired and the Brooklyn Nets defeated reigning champs Miami, 88-87, to finish off a four-game season sweep of the Heat.

It marked the third time Brooklyn slipped past the Heat by a single point as the Nets remained the lone NBA team Miami has not beaten this season.

With time running out in the fourth quarter, and Miami behind by one point, Ray Allen grabbed a rebound and passed the ball to James.

The reigning NBA MVP drove to the basket and went up for a dunk but Plumlee timed his leap perfectly, contesting James’ dunk as the game clock expired.

A bewildered James looked over at the officials pleading for a foul but they did not call one.

Plumlee didn’t want to take all the credit for the victory.

“You have to guard LeBron with multiple guys,” he said. “I thought Shaun (Livingston) did great job on him individually. The guys also rotated help to guard him.”

Joe Johnson tallied 19 points, while Marcus Thornton came off the bench to score 16 points, grab 6 rebounds and make 4 steals for the Nets, who have won six of their last seven games.

James finished with 29 points, 10 rebounds and 6 assists for Miami, who lead the Indiana Pacers by half a game for the top seed in the Eastern Conference.

Miami squares off against the Pacers on Friday, April 11 (Saturday, April 12 in the Philippines).

Thornton drained a three-pointer from the right side with 61 seconds remaining and Johnson got a floater to fall to cap a 9-2 flurry to give the Nets an 86-82 lead.

James drove for a three-point play at the opposite end before Plumlee made an easy layup. Chris Bosh’s dunk off a James pass got Miami within 88-87 with 34 seconds to go.

In the first quarter, Thornton capped an early 12-1 Brooklyn surge with a three pointer to give Brooklyn a 14-7 lead halfway through the quarter.

Mirza Teletovic’s trey and Thornton’s steal and layup during the final minute of the first extended the lead to 26-14 heading into the second.

Miami fought back. In the middle of the second quarter, Bosh finished off an 11-2 Heat rally with a three-point play to cut the gap to 35-34 with 4:16 to go.

Plumlee said Tuesday’s game was a like a playoff contest.

“The most important thing is this is game we were tested. We need that going into the playoffs,” he said. – Rappler.com