Facebook Twitter Copy URL
Copied
The MGM Grand has been the site of many of Manny Pacquiao's greatest victories and losses. The Pacman made his return to the venue on Tuesday

LAS VEGAS, USA – It had been 487 days since Manny Pacquiao had stepped foot in the MGM Grand, but it was like he had never left. Hundreds of Pacquiao’s fans rushed the arena to greet the eight-division champion at his grand arrival at the casino on Tuesday, April 8 (Wednesday PH time), lending credence to the adage that distance makes the heart grow fonder.

Pacquiao, who will face WBO welterweight titleholder Timothy Bradley on Saturday, April 12 (Sunday PH time), was accompanied by trainer Freddie Roach, strength and conditioning coach Justin Fortune and his outsized entourage. The Pacman (53-5-2, 38 knockouts) was all smiles amidst the chaos, looking more like an alum returning for a school reunion than a man preparing for battle.

The last time Pacquiao had stepped foot in the venue he had been knocked out in six rounds by Juan Manuel Marquez. He had also lost to Erik Morales and Timothy Bradley in the venue.

But MGM also hosted many of the performances that carried him to international stardom, including his knockout victories over Oscar de la Hoya, Miguel Cotto and Ricky Hatton. Still, the feeling was that of a returning war hero making his way back to an old battleground.

“This is great, it’s nice to be home,” said Roach, who has guided Pacquiao’s career since taking over shortly before his American debut, a 2001 destruction of Lehlohonolo Ledwaba to win the IBF junior featherweight title at the MGM.

Bradley, by contrast, slipped into the venue around 930 PM to near anonymity after watching the Los Angeles Lakers game against the Houston Rockets. 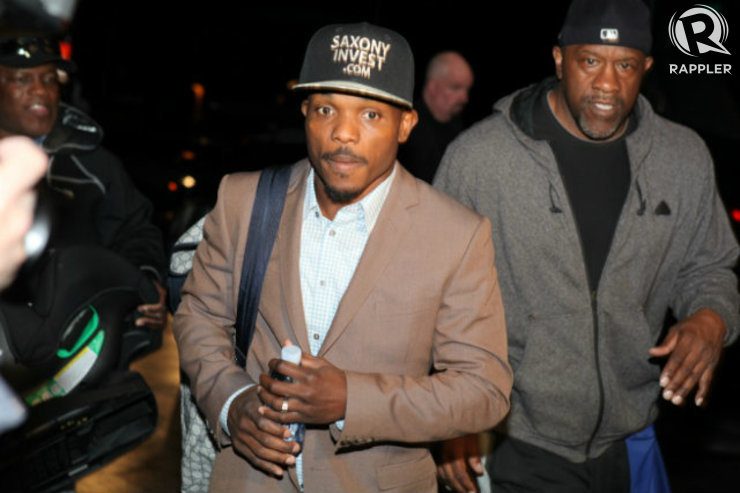 Roach, who has served as the reserved Pacquiao’s mouthpiece, was optimistic when speaking about Pacquiao’s return to the more aggressive style that had made him a popular crossover figure.

“He knocked down (Roger) ‘Speedy’ Gonzlaez in sparring, first knockdown we had in a long time. It was good to see that,” said Roach. Gonzalez, a super featherweight (130 pounds), hasn’t fought since 2012 but was 23-0 before his first loss in 2004.

Roach says that Pacquiao, who defeated Brandon Rios in his last outing in November, has been irked by many of the jibes Bradley (31-0, 12 KOs) had shot at him, where he questioned Pacquiao’s hunger to fight and motives for continuing his career.

“Manny is a respectful guy. Bradley usually doesn’t talk, but now he says (Pacquiao) is only doing it for the money, he has no desire. Manny is a little pissed off. I like when he’s pissed off.”

Roach was in the corner of current WBO junior welterweight titleholder Ruslan Provodnikov for his bout with Bradley following the first Pacquiao-Bradley fight. Roach feels that that fight, where Bradley was knocked down twice and remarked that he felt concussed, will play a factor in Saturday’s fight.

“He’s been in some real good fights, some of those fights were really rough on him, he had concussions and so forth,” said Roach. “So I think that will play against him in this fight. Sometimes I wonder if that beating he took against Ruslan is going to hurt him in the future. We’ll find out soon.”

Roach added that the diversity of Pacquiao’s sparring has prepared his ward for any gameplan Bradley chooses to follow.

“If Bradley wants to run, it’ll make a stinky fight. But if he wants to fight, my guy will knock him out.” – Rappler.com