Pac is Back! Pacquiao defeats Bradley by decision LAS VEGAS, USA – The newspapers around the world will have a three word headline for tomorrow’s papers: Pac is Back! Manny Pacquiao avenged his controversial 2012 loss to Timothy Bradley with a dominant decision victory at the MGM Grand in Las Vegas Saturday, April 12 (Sunday, April 13 in the Philippines) to regain the WBO welterweight title. Two judges scored it 116-112 for Pacquiao, while the third had it wider at 118-110. There were no knockdowns but Pacquiao (54-5-2, 38 knockouts) turned the clock back with his vicious demeanor, pounding Bradley (31-1, 12 KOs) around the ring during the second half of the fight to pull away on the scorecards. Pacquiao began the fireworks in round 2, stunning Bradley with a left cross. Bradley returned the favor in round 4, hurting Pacquiao with a right hand.

Pacquiao showed his intensity by banging his gloves together, just like the old days, and firing back right away. 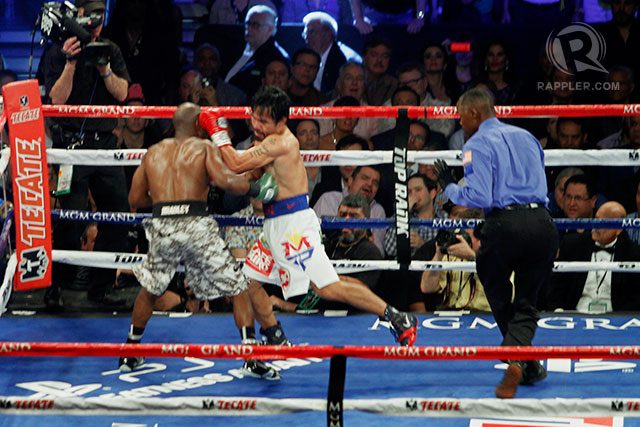 The two traded momentum until the seventh round, when Pacquiao stunned Bradley badly and sent him into the ropes, where the 35-year-old from General Santos City hammered him mercilessly.

Bradley, 30, survived but was never again a threat, spending most of the fight in full retreat, trying to make it to the final bell. Who really won Pacquiao-Bradley I?

Pressure is on Pacquiao to prove he’s still lethal