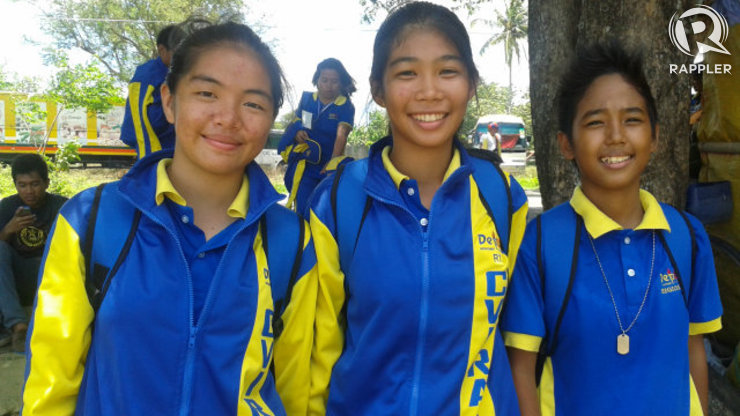 LAGUNA, Philippines – They were outside, practicing for this year’s Palarong Pambansa. They thought it was a joke. They didn’t know it was the strongest earthquake the country had felt in 23 years.

Last October 15, 2013, an earthquake with a magnitude of 7.2 hit Bohol. With more than a thousand casualties and billions of pesos worth of damage, Bohol was a temporary wasteland.

Fifteen-year old Bol-anon tennis players Denice Kaye Alota, Dawn Albert Uy and Joanne Ashley Zamora experienced one of the most traumatic experiences of their lives at a very young age.

Cousins Alota and Zamora stays at the fault lines west of Bohol, Inabanga, while Uy lives in Ubay, a town prone to earthquake-induced landslides.

Practicing amidst an earthquake

(“We were practicing. We thought it was just a joke when suddenly, all of us couldn’t move because of the intense ground-shaking.”)

Alota and Zamora, accompanied by other players and their coach, were outside an old building in Inabanga when they felt the ground shaking. At that time, Zamora sustained an injury to her forehead.

(“Our coach got to her first and went under a table. She probably didn’t notice that she got injured.”)

When they finally realized that it wasn’t a joke, they ran to the nearest building they could find – their subdivision’s clubhouse. Along with their coach, they hid under a table made of steel. Lucky for Uy, she wasn’t able to experience what had happened during the practice. Their place still got hit by the earthquake, but according to her, there were less damages compared to Inabanga who suffered a great blow.

A loss of weeks of training

Despite the horrifying incident that took place outside their homes, they are still present at Laguna ready to represent their region.

(“We couldn’t practice because every time we do, we encounter aftershocks.”)

After the earthquake, aftershocks still rocked the grounds of Bohol. Thousands of aftershock were recorded and until this day, the people of Bohol can still feel bits and pieces of last year’s deadliest tremor.

(“Before we left, there was another aftershock.”)

Losing weeks of training did not dampen the spirits of the Central Visayas Secondary Tennis Team. They are confident that their skills are sharp enough for the sixteen competing regions.

(“We’re confident. We offer our games to our fellow Bol-anons in the hopes of boosting their spirits.”)

The Secondary Tennis team of Central Visayas only placed third in doubles last year. This year, they’re expecting all teams to come out strong.

From the deadliest earthquake to the strongest tropical cyclone the country has faced, Central Visayas is still standing. They are ready to battle it out in the country’s much-awaited sports event. – Rappler.com