May 7, 2014 8:05 AM PHT
Agence France-Presse
Facebook Twitter Copy URL
Copied
After winning the NBA scoring title for the fourth time in five seasons, Kevin Durant is named the NBA's MVP for the first time 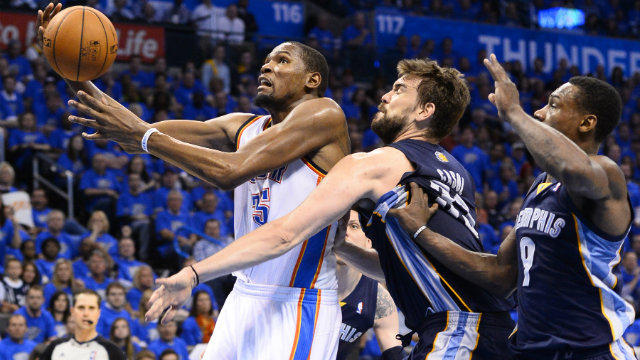 NEW YORK – Oklahoma City Thunder forward Kevin Durant, the NBA’s top scorer for the fourth time in five seasons, was named the league’s Most Valuable Player for the 2013-14 campaign Tuesday.

It’s the first MVP award for the Thunder superstar and the first for the franchise, which began as the Seattle Supersonics before moving to the American heartland.

Durant received 1,232 points in balloting for the honor. That included 119 first-place votes from a panel of 124 voters that consisted of sportswriters and broadcasters throughout the United States and Canada as well as an NBA.com MVP fan vote.

“It’s just a surreal feeling,” Durant said. “I never thought I could make it through college to the NBA and be standing here as the NBA Most Valuable Player.

“I failed so many times and got back up. I went through the toughest times but I’m still standing.”

Durant recalled his youth when his mother Wanda struggled to feed him, his sister and two brothers as they moved from apartment to apartment in suburban Washington.

“You sacrificed for us,” Durant told his mother. “You are the real MVP.”

Durant, wiping away tears at times and his voice choking on many others, thanked teammates as he recalled personal moments of encouragement and acts of support.

“I don’t know why I’m crying so much, man,” said Durant. “I go home and think about that stuff. When you have people behind you, you can do anything. I love all you guys. This is our trophy.

“You made me believe in myself. You made me a better player and a better person. You all mean so much to me. I could walk in and see (you smile) and that could change my day.”

Miami’s LeBron James, winner of the last two MVP awards and four of the last five, finished second in the voting with 891 points and six first-place ballots.

“Much respect to him. He deserves it,” James said of Durant. “He had a big-time MVP season.”

Blake Griffin of the Los Angeles Clippers was third with 434 points and Chicago’s Joakim Noah was fourth on 322.

Durant, 25, averaged a career-best 32.0 points per game and averaged a career-high 5.5 assists and 7.4 rebounds a game. Only Michael Jordan, Wilt Chamberlain and Elgin Baylor had such high marks in each category in a single NBA season.

With four career season scoring titles, Durant matched Allen Iverson and George Gervin for third on the all-time list, trailing only Jordan’s 10 and seven by Chamberlain.

To younger and newer Thunder players, Durant said, “You guys make me so much better without knowing it. I know I set an example. I know I say words I’m not supposed to say. When I need you, you give me that extra push.

“I’m not always the best leader, the best player. Just as much as you think I’m making you better, you elevate my game.”

Durant gave his highest praise to Russell Westbrook, holding his MVP trophy and telling him, “You have a big piece of this. You are an MVP-caliber player.”

Durant shot better than 50 percent for a second consecutive season and 39.1 percent from three-point range. His 703 free throws made from 805 attempted were both league highs, giving him an 87.3 percent success rate from the line.

“He strived to be the best player he could possibly be and he has done it with such a pure heart that it inspires his coaches and teammates alike,” Thunder coach Scott Brooks.

“He is as humble a superstar as you will ever run across.”

Durant led Oklahoma City to 59 regular-season victories and the second seed in the Western Conference behind San Antonio, even though star teammate Westbrook missed almost half the season.

“The thing that made him the Most Valuable Player for us this season was to step up when we were without Russell… that it was best for him to step back a little bit and let the team function at its full capacity,” Thunder general manager Sam Presti said.

During the regular season, Durant put together a streak of 41 games in a row with 25 points or more, surpassing Jordan’s 40-game run for the third-longest such streak in NBA history.

And he came through when it mattered, leading all players this season in “clutch points” –points scored in the final five minutes of a game when five points or less separated the contestants. – Rappler.com