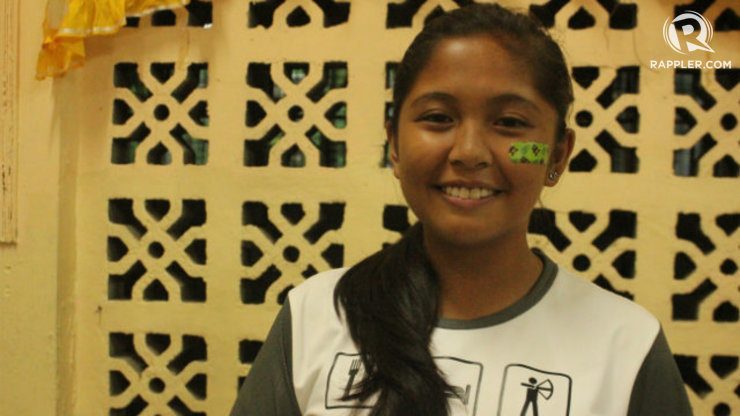 Facebook Twitter Copy URL
Copied
Dubbed "The Golden Girl" at this year's Palaro, Ilocos' Mary Queen Ybañez is on a one-girl crusade to bring the attention she feels archery deserves in this nation

LAGUNA, Philippines—As Oprah Winfrey says, “You can have it all. Just not all at once.” But it seems that Ilocona archer Mary Queen Ybañez is an exception to this rule.

The 16-year-old rising archer star has proven that she can have it all at once as she continues her winning streak in archery in Palarong Pambansa 2014.

“I want to prove to everyone that Palarong Pambansa is not just about basketball,” said Queen.

Queen is a native of San Fernando City, La Union. She is the youngest among her three other siblings. Even though her parents were separated years ago, it did not dampen her dreams to be a successful archer. Her mother, Mariquin Ybañez, said that she will support her daughter all the way.

(Being a single mom, it is hard to support her needs in archery but I know that it makes her happy that is why I will always support her.)

For some people, playing archery is expensive. One complete equipment for the said sports costs a hundred thousand or more and single session for training costs around 2,500 pesos ($56 USD). But this has not been a hindrance for Queen to pursue her dreams.

(Some said that playing archery is too costly. Equipment is expensive but while I still can, I will support her needs.)

In a show of support, Mrs. Ybañez has been in Laguna since last week. She is staying with her daughter in their billeting quarters at Pedro Guevarra National high School.

Queen has earned a reputation as the “Golden Girl” after winning a staggering five gold medals in archery. She is the grand slam champion in the four events in single peat category and today, May 8, she bagged the gold medal for the Single Fita round.

Will she be able to continue her winning streak in the three events left for archery?

Queen started pursuing archery four years ago while a freshman in high school. When she was asked what influence her to try archery, she said “Actually no one influenced me to play archery. I was just curious that time on the game and how it goes. That’s why I joined the archery club in our school to get to know it even more.”

However, her first attempt in 2011 was not a smooth start. She failed to place in any of the top three spots in their regional sports competition. But this did not prevent her from playing archery. Instead, it served as her motivation to play harder.

The following year, 2012, marked the beginning of brighter days in her Palaro journey. As a newbie, she was observant on how her opponents move.  She was pressured to bring medals to her hometown and to her school.

(I was pressured when I first competed in Palarong Pambansa. I don’t know how the game system works here.)

Her first try in Palarong Pambansa did not end successfully. She did not place in any of the top three positions. However, she ranked 5th among 67 other contenders from different regions. For her coach, Jigger Paragas, it was a good start for her for the mere fact that this was her first Palaro.

(I did not feel upset that time. I took comfort by thinking that I was only starting.)

Her comeback in 2013 surprised her coach. “My coach was amazed when I ended Palaro 2013 with medals. There is this archer who was also under her that I beat.”

After almost one year of rigid trainings, she bagged three gold medals at the 2013 Palaro, two for Distance Single Peat events and one for Olympic Team event.

“That was the time that I proved to myself that I can do better,” shared Queen.

This is her last year of eligibility in Palarong Pambansa and it seems that she will be ending her Palaro competition with a blast.

(I saw in her the determination to reach her goal which is to surpass her achievements last year.)

Queen is the only archer in this year’s Palaro who has won gold medals in any of the distance single peats; the 30 meters, 40 meters, 50 meters, and 60 meters.

In her four years as an archer, she has already collected a total of 80 medals in local, regional and national competitions.

(I am sure that Queen will be a successful archer. She can compete with archers from other countries.)

After Palarong Pambansa, Queen plans to continue playing archery while in college. She wants to pursue a degree in Psychology. However, she has not yet decided on what university or college she will enroll in.

(As of now, none, my mom and I are waiting for recruitment from universities because this could be a big help in my college studies.)

Queen hopes that someday archery will get attention to Filipinos. She was happy that she got interviewed by Rappler. “There is more to Palarong Pambansa than basketball and volleyball,” stressed Queen.

Despite her success, Queen says she is sad that archery is not getting the attention that it deserves here in the country where in fact there are a lot of good archers here. “Siguro kung mabibigyan lang ng atensyon at matututukan ang sports na ito dito sa atin, maaaring mag excel tayo dito,” said Queen.

(Maybe if archery will get enough attention to Filipinos, we can excel on this sport.)

Queen advises athletes to follow what their heart says. “Do what you want to do. Have faith in yourself. Enjoy every game. Don’t be afraid to fail, it will give you a good lesson,” added Queen.

Queen is set to compete in International Youth Festival in South Korea on August 2, 2014. – Rappler.com