May 22, 2014 8:59 PM PHT
Expo Mejia
Facebook Twitter Copy URL
Copied
We’ve all witnessed great escapes in sport but the efforts of the Philippine Volcanoes last weekend will go do down as one of their greatest. 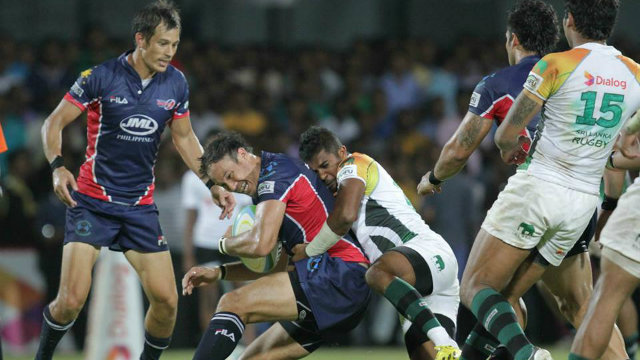 We’ve all witnessed great escapes in sport but the efforts of the Philippine Volcanoes last weekend will go do down as one of their greatest.

The PH national rugby team produced a miracle comeback in the dying minutes of their game against Sri Lanka on Saturday, May 17 to secure their first victory in the 2014 Asian 5 Nations (A5N). It sets up an intriguing last day of competition this weekend.

Japan and Hong Kong will play for the A5N crown along with direct entry into next year’s World Cup. The loser will be forced into an intercontinental playoff against Uruguay later in the year.

More importantly, for local fans, the Volcanoes will face off against South Korea. The winner will finish third at the A5N and thus guarantee a place in next year’s revamped competition. The loser will be relegated to Division 1.

The Volcanoes have destiny in their own hands thanks to their never say die attitude. Win and they stay up; lose and they will be relegated for the first time in A5N competition.

Of course, it could have been all so different had Sri Lanka taken any one of their many opportunities to seal victory. With a few minutes remaining, Sri Lanka kicked a penalty to lead 25-19 and the crowd began some early celebrations.

The 6-point margin meant that the Volcanoes needed to score a try and kick the conversion to ensure victory. That seemed unlikely as the Sri Lankans defended bravely and had so far kept the Volcanoes scoreless in the second half.

With defeat imminent, the Volcanoes threw caution to the wind and attacked at every opportunity. They came up short a number of times due to handling errors but Sri Lanka’s poor discipline kept giving the Volcanoes another chance.

All seemed lost when the Sri Lankans broke deep into opposition territory. With seconds remaining the Volcanoes still needed to travel the length of the field to score. Halfback Jake Letts came up with a vital intercept to give the Volcanoes one last attacking opportunity.

As the team nudged closer to the line, it was Letts again who sliced through a gap in the Sri Lankan defensive line to score the crucial try. Down by one point, Alex Aronson was given the task of kicking the relatively simple conversion for two extra points and the win. The Volcanoes looked to be out of jail.

However Aronson missed the kick and it was now the Sri Lankans celebrating with relief knowing they were the ones who had broken out of jail.

Sport is a cruel business. There was still another twist to the story. The referee had signaled full time after the missed kick but a call from the assistant referee for an early charge down by the Sri Lankans meant the Volcanoes were allowed to retake the kick.

Aronson made no mistake the second time and it was the Volcanoes emerging victorious. They had somehow produced a first class miracle. The silence of the stunned crowd was music to their ears. The protests of the Sri Lankan players were turned away by match officials.

Many would suggest the Volcanoes didn’t deserve the win. It was more a case of Sri Lanka imploding in the final few minutes through ill-discipline and poor decision-making. I couldn’t disagree more.

The Volcanoes were definitely fitter and finished the stronger of the two. Their superior attack skills were evident throughout the game. They had placed themselves in a position to win. The fact Sri Lankan was unable to land a knock out blow takes nothing away from the Volcanoes performance.

There was no luck involved here. It was the Volcanoes who still had to get up off the canvas and deliver the knock out. Which is exactly what they did. Their class and resilience shone through. This close-knit band of warriors fought to the death and came away with the result.

Like a three-point buzzer beater this was truly a win to savor. It epitomized the true character of athletes who have repeatedly proven their worth on and off the field. The Volcanoes just never ever give up.

Captain Oliver Saunders said the team never gave up hope. He added, “after making a few mistakes the talk was still pretty positive, we were confident we could score if we held the ball and played smart.”

Try scoring hero Jake Letts said it is a feeling he will never forget. Describing his heroics he said, “the gap just appeared and luckily it was big enough for me to get through and reach for the try line.” He added, “it was a big relief to win in extra time knowing our team never gave up.” 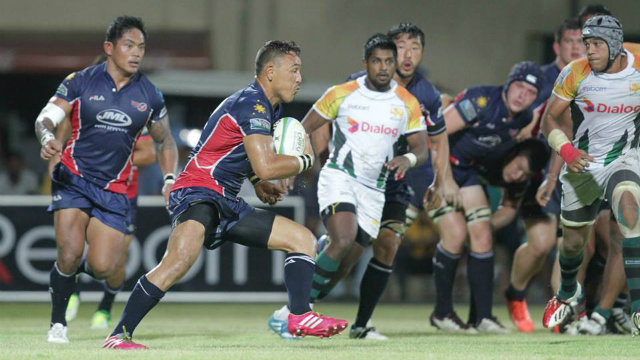 The win has given the Volcanoes its all time highest world ranking at 52. They now have the chance to enter in the 40’s if they can topple the mighty Koreans (ranked 26th) this weekend.

It would be a fairytale finish for former captain Michael Letts who plays his last test match for the Volcanoes this Saturday. No one deserves it more than the Letts. He has been a major factor in the rise of the Volcanoes to world prominence.

Letts is expecting no special favors from the Koreans, “it will be a very physical confrontation just like the game against the Sri Lankans.” He added, “our boys really dug deep last week, especially the forwards, it wasn’t pretty but we’ll take the win, we’re looking forward to Korea which will be another big challenge.”

Coach Stuart Woodhouse has named a relatively unchanged team. There is a positive feeling in the camp at the moment and all are quietly confident of a major upset on the weekend.

And that confidence is not founded only on wishful thinking. The Volcanoes are a 20-point better side playing at home. The Koreans will struggle in the heat. They are not at full strength and their form has been patchy throughout the series.

Let’s all get out there and support the Volcanoes on Saturday. It’s another shot at history. It’s your last opportunity to bid farewell to the legendary Michael Letts. It’s your chance to see a team of talented athletes whom you’ll be so proud of because they will never ever give up on you.