May 30, 2014 3:38 AM PHT
Rappler.com
Facebook Twitter Copy URL
Copied
Kaohsiung City of Chinese Taipei and the Malaysian capital of Kuala Lumpur have shown interest in taking over the hosting of the 2019 Asian Games from Vietnam 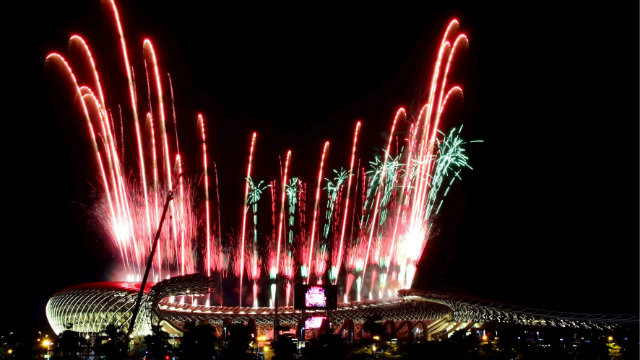 MANILA, Philippines – Kaohsiung City of Chinese Taipei and the Malaysian capital of Kuala Lumpur have shown interest in taking over the hosting of the 2019 Asian Games from Vietnam, which withdrew last month due to financial concerns.

Indonesia’s second largest city of Surabaya is the top candidate to host the 18th edition of the quadrennial games, which were moved to 2019 so it won’t coincide with the 2020 Tokyo Summer Olympics in Japan.

The Olympic Council of Asia (OCA) hinted that Surabaya is capable of taking over from Vietnam after being one of the satellite hosts, along with Jakarta, of the 2011 Indonesia Southeast Asian Games with Palembang as the main hub.

“Indonesia [Surabaya] does have a certain advantage. But at this moment, there isn’t a specified candidate for hosting the 2019 Games,” said OCA president Sheikh Ahmad Al-Fahad Al-Sabah, in an earlier interview with The Wall Street Journal.

Surabaya was one of the two final bidding nations for the 18th Asiad along with Hanoi, Vietnam. The capital of East Java lost to Hanoi during the OCA General Assembly in 2012. The new host city will be known during OCA’s general assembly in September in Incheon, South Korea.

Kaohsiung City previously hosted Chinese Taipei’s 2013 Davis Cup Asia/Oceania Group I tie against Australia. Malaysia, on the other hand, wants to host the Asian Games provided that OCA will help them shoulder the cost.

New Delhi, India and Hong Kong are also considering of bidding to take over the hosting rights from Vietnam.

Vietnam’s Prime Minister Nguyen Tan Dung last week said his country wasn’t financially prepared to host an event with the same magnitude like the Asian Games with the country expected to spend as much as $150 million with construction of other facilities not yet included.

Vietnamese sports minister Hoang Tuan Anh, in a separate statement, added: “Vietnam isn’t experienced enough in hosting such a big scale of sports event. After understanding all of those obstacles and careful consideration, we are looking for OCA’s sympathy and understanding on our withdrawal.”

Vietnam is also feeling the impact of the global financial crisis and the World Bank, which said that the country’s economy is expected to grow 5.5 percent this year, hinted it won’t lend the country money to build its sports facilities.

“The country’s socio-economic situation remains in difficulties. The state budget is limited and prioritized for other urgent projects,” Dung said in a statement. “Vietnam’s image could be hurt if it failed to properly organize the Games.”

Al-Sabah met with Vietnam’s delegation and understood the country’s situation adding that OCA won’t be imposing any sanction or penalty after it withdrew from hosting the 2019 Asiad.

“The OCA isn’t upset about this decision but welcomes that Vietnam made this decision to give us more good time to find a replacement city.” – Rappler.com