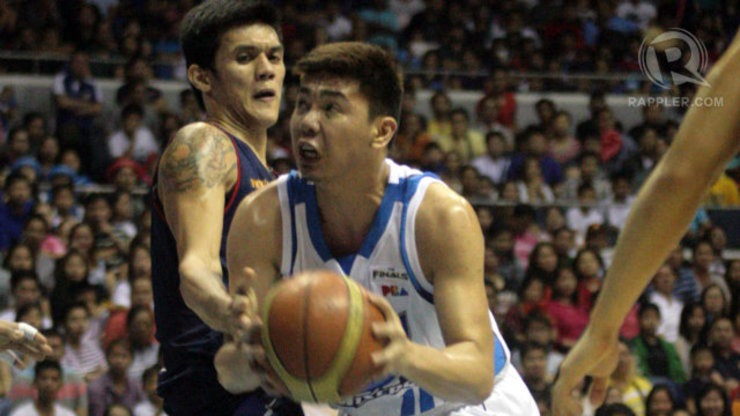 MANILA, Philippines (UPDATED) – The San Mig Super Coffee Mixers, with their extraordinary ability to deliver a mean finishing kick, came through once again in the fourth – when it counted most – to dispatch the Rain or Shine Elasto Painters, 78-69, in Game 3 of the Finals in the 2014 PLDT Home Telpad PBA Governors’ Cup on Saturday, July 5 at the Smart Araneta Coliseum.

After guys like James Yap and Allein Maliksi, this time, it was rookie Ian Sangalang who stole the show and played like a veteran in the early goings of the fourth as he carried the Mixers during a 12-2 fourth quarter run, which permanently turned the tables on Rain or Shine.

“Ian stepped up,” said San Mig head coach Tim Cone. “He was the one who gave us that run along with Mark (Barroca) and Justin (Melton).”

The 22-year old slotman out of San Sebastian College-Recoletos scored 6 points during that 12-2 spurt that turned a 58-59 deficit into a 70-61 advantage for the Mixers.

Sangalang finished with 13 points with 8 of those coming in the final frame.

Operating quietly was guard Mark Barroca, who made all those plays possible during that crucial stretch. He tag-teamed with Justin Melton in breaking down the defense, creating space and providing the assists for easy baskets underneath.

Barroca had a quiet 6 points and two assists while Melton chipped in two markers and 4 dimes.

The Mixers never relinquished the lead from that point on, clearly playing with much more energy than their counterparts.

That momentum-shifting stretch also exposed the uncertainty in the Painters’ game on Saturday night.

They tallied 4 turnovers from the 10:34 mark of the payoff period up until 7:10 alone, during which time San Mig Coffee was scoring at will. It showed the defensive intensity that was propelling the Mixers all game long, even against a 25-point third quarter burst by Rain or Shine.

Cone’s wards milked 13 turnover points on Rain or Shine and out-rebounded them 52-39.

“We had a chance in the fourth quarter but we turned the ball over I think 5 straight times. Just terrible mental lapse.”

Import Marqus Blakely led all Mixers with 17 points and 17 rebounds as Joe Devance and PJ Simon each had 10 points.

With the win, San Mig Coffee shoved the Painters into a precarious position as they went up 2-1 in the series, moving one game away from their 4th crown and the third one to claim the much talked about Grand Slam.

Though Cone would much rather not speak about it, at least inside his team’s locker room.

Cone is in no way expecting the series to end on Monday. Though he hopes it will.

“We just have too much respect for this team. I can tell in our guys that this is the mentally strongest team we will play. They are so mentally strong, they don’t break. You just gotta go out and compete with them every moment, every possession and hope you win more possessions than they do.”

Best Import of the Conference AZ Reid was the only Rain or Shine player in double digits with 31 points to go with 8 rebounds. 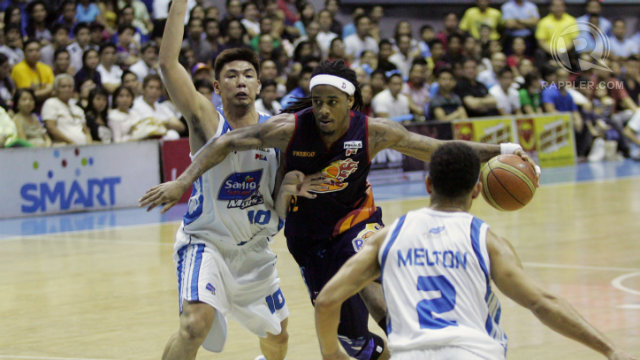 Guiao failed to get contributions from his locals as Beau Belga had only 8 points while usual suspects Jeff Chan and Paul Lee had only 4 and two points, respectively.

“We just got outworked today. We relied too heavily on AZ (Reid) for scoring,” Guiao said.

Unlike a triumphant Reid at the end of Game 2, the import was a picture of everything that went wrong for Rain or Shine in Game 3.

As the final buzzer sounded, Reid had both hands on his knees with his head down, staring at the floor, perhaps hoping that a Game 5 is in their futures.