ONE FC: Pinoy bet Kelly rallies back to submit Lisita MANILA, Philippines – Bathed in his own blood, Eric Kelly overcame insurmountable obstacles to elevate his stature as the next championship contender for the featherweight title with a second-round submission victory over Rob Lisita in the main event of ONE FC: War of Dragons on Friday night, July 11 at the National Taiwan University Sports Center in Taipei.

The Filipino fighter’s refusal to relent with the hard-hitting Australian earned him a come-from-behind win when he latched on a rear-naked choke to force Lisita to wave the white flag at 3:43 of the second stanza.

Lisita was the aggressor from the outset, battering his Pinoy foe with inexorable strikes before dragging Kelly to the canvas to look for submission opportunities.

Kelly managed to reverse the position courtesy of a scramble and had a chance to take his opponent’s back, but Lisita wittily avoided danger to end the first round.

In the second canto, Lisita surged like an untamed ox as he clobbered his cage counterpart with power punches that eventually opened the floodgates of Kelly’s nose.

With blood continuously pouring from his nose, “The Natural” desperately shot for a double-leg takedown, but Lisita sprawled to stuff the attempt and then had a rear view of Kelly.

As “Ruthless Rob” pounded heavy blows to the head, Kelly sneakily slipped out of the barrage and took Lisita’s back for a rear-naked choke.

However, referee Yuji Shimada momentarily stopped the action and called in the cageside physician to look at Kelly’s broken nose.

After the doctor decided that Kelly could go on, both men went back to the original position, but Lisita escaped to get back up on his feet.

With the 31-year-old Aussie still pushing forward, Kelly was taken down by Lisita, who quickly transitioned his body into side control.

As Lisita hunted for another submission hold to conclude the back-and-forth sequence, Kelly amazingly found the back door to lock the fight-ending choke. 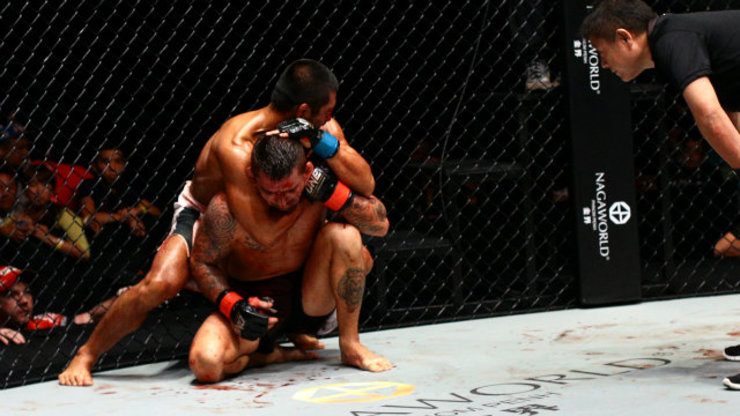 “For me, I just come here to test my skill. If I can push myself to [beat] Rob, he’s a tough guy but I’m a fighter. I will try to do my best even if I cannot punch, I cannot walk, I cannot fight, but I can still get punched, still kick, so I’ll still be fighting,” Kelly said in his post-fight interview.

With his remarkable performance against Lisita, Kelly improves his mixed martial arts (MMA) record to 11-1 and likely earns a date with reigning featherweight king Koji Oishi at ONE Fighting Championship’s (ONE FC) first event in Dubai on August 29

The 5-foot-7 native of Baguio City fought for the inaugural ONE FC featherweight crown in February 2013, but he fell short to fellow Filipino combatant Honorio Banario.

His disappointing setback to Banario was the first loss of his professional career and prompted Kelly to take ample time away from fighting to heal his right eye, which was injured prior to his meeting with “The Rock” at ONE FC: Return of Warriors.

On the other hand, Lisita drops his win-loss slate to 14-6 and snaps his four-fight winning streak.

In other matches, Koji Ando gave Brazilian lightweight Rafael Nunes his first taste of defeat when the 29-year-old Japanese fastened a deep rear-naked choke to get the tapout at the 1:48 mark of the first frame.

Paul Cheng obliged Mahmoud Hassan’s corner to call it off before the third round as he exhausted the Egyptian heavyweight with late ground-and-pound rally in the first and second periods.

Furthermore, Chi Lewis Parry avenged the No Contest ruling in his initial meeting with Alain Ngalani as he stunned his Cameroonian rival with vicious elbow shots on the ground that compelled referee Oliver Coste to halt the contest in the opening salvo of their rematch.

On the preliminary card, Nathan Ng successfully made a professional MMA debut by submitting Florian Garel with a first-round north-south choke in their featherweight clash.

Eliot Corley knocked out Malaysian prospect Rayner Kinsiong with an elbow in round one, while Jeff Huang spoiled Bala Shetty’s first prizefighting stint with hammerfists in the first round. – Rappler.com