Jun 2, 2012 11:26 AM PHT
Carlos Santamaria
Facebook Twitter Copy URL
Copied
The game ended in a draw, the best result ever for the Azkals against the Tigers. 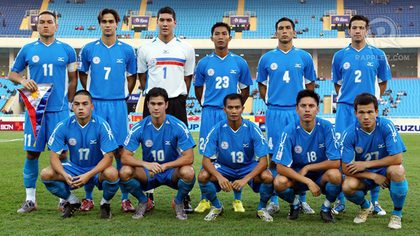 MANILA, Philippines – The Philippine Azkals drew 0-0 with Malaysia on Friday, June 1, in their best result ever against the Tigers on their home turf, despite missing key players like Phil and James Younghusband, goalie Neil Etheridge and team captain Aly Borromeo.

But Etheridge’s replacement, young Roland Muller, was by far the best man on the pitch and saved a handful of excellent chances by Malaysia, whose star playmaker Safi Sali had a lackluster performance and was overshadowed by skipper Safiq Rahim at the Shah Alam Stadium in Kuala Lumpur.

The Azkals, despite enjoying less possession, pretty much dominated the midfield during the first half, and went close to scoring when Stephan Schrock pounced on a poor clearance from the defence aborted by jittery keeper Kairul Fahmi.

Malaysia recovered from the initial shock and caught the Philippine defense off-guard on the left flank, but between the strikers and Muller the score stayed goalless at halftime.

After the break, the Filipinos relaxed their hold of the midfield and Malaysia enjoyed more and better chances, all of them aborted by the new Pinoy goalie, who had the save of the match when he swatted a tricky left-footed free kick.

But the Azkals were sloppy in their efforts to pursue a goal and coach Hans Weiss insisted on playing Angel Guirado on the right even if he was a head taller than both Malaysian full-backs.

Despite a couple of chances on fast breaks, the score did not move and the game ended in a draw, the best result ever for the Azkals against the Tigers (current AFF Suzuki Cup Champions) on Malaysian soil.

That clearly frustrated the local players, more bent on diving to get the Filipino players booked than seriously going for victory.

The Azkals on Friday kicked off a series of three FIFA-sanctioned friendly matches they will continue on June 5 against Indonesia at the Rizal Memorial Stadium and June 12 against Guam at the Panaad Stadium in Bacolod.

All 3 games are FIFA-sanctioned, hence the results will affect the Azkal’s world ranking.

During their last encounter last February, the Philippines led Malaysia 1-0 until the final seconds of the match when Ahmad Shakir Ali, who, on Friday night (June 1), came on as a late substitute for the Tigers, scored a goal bringing the result to a 1-1 draw.

Below is our live blog of the Philippine Azkals vs Malaysia Tigers match.