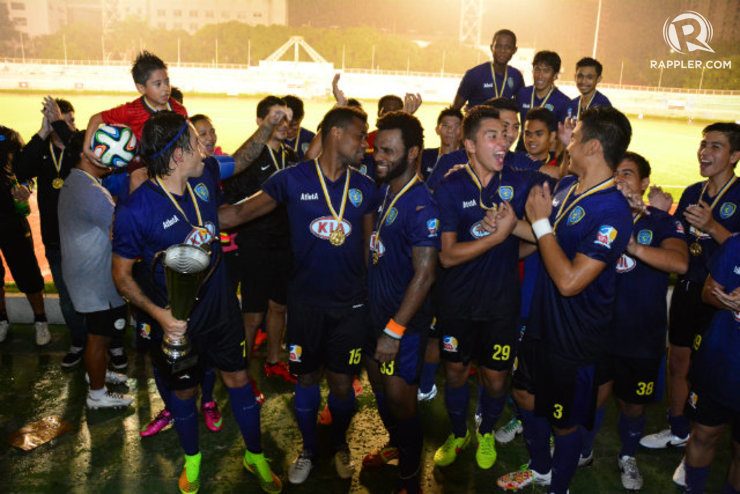 Despite the downpour of heavy rain at the newly refurbished Rizal Stadium, fans from both sides came to watch the squads battle it out for their chosen charity.

In a striking turn of events, however, the two teams in the finals agreed to split the P100,000 bounty for the inaugural Football Alliance Charity Cup between the two chosen charities, namely the FairPlay for All Foundation and the Homeless World Cup Team Philippines.

As the game started, a hasty attack from the Kaya side marred the defense of Global in hopes of striking gold in the early part of the first half.

Kaya’s Jovin Bedic opened the blitz for his club by striking the ball from long distance but was easily denied by keeper of Global FC.

On the other side, Izo Elhabib capitalized on a defensive miscue by Kaya, taking a shot on goal that was denied by Kaya’s Nick O’Donnel.

Several attacks on both sides of the pitch were laid down by the opposing squads, each eager to score and take the edge over the other for the remaining minutes of the first half.

Mark Hartmann scored off an assist by John Kanayama from the left wing to break the silence of the first half in the 44th minute.

Not long after the opening goal, another one sank for Global, this time by Elhabib who curled the ball to the far side of the post to beat the goalie.

As rain poured on the second half of action for the final, a tough tackle by Kaya FC’s Thomas Taylor prompted the referee to pull out a yellow card from his pocket.

The game continued to be physical as a hard challenge by Emmanuel Mbata from inside the penalty area garnered him a caution while a penalty kick was awarded to the Global side.

The commotion from inside the box rumbled into a scuffle resulting to a yellow card to Global’s Amani Aguinaldo and another to Mbata who was then sent off the field due to a red card.

As the opposing sides settled, Hartmann fired the penalty to the O’Donnel-manned goal to extend the lead of his team to 3-0.

Making matters worse for the yellow shirts, a second yellow card was presented to Taylor after a stiff tackle on Global’s Marco Casambre.

With just 9 men on their side, Kaya’s playing coach Chris Greatwich was sent in as a substitute in hopes of salvaging their conquest to take the FA Cup.

The substitution proved to be a great choice for Kaya FC as Greatwich sank the last goal in the contest on the 81st minute from just inside the box.

Four minutes of stoppage time was added to regulation but no goals from either side were sank, with Global prevailing 3-1.

Amani Aguinaldo from the winning club was chosen as the Most Valuable Player of the Football Alliance Charity cup.

Stallion conquered the first few minutes of the first half as Christian Thomert converted a goal in the 22nd minute to take the early lead for his crew.

The Loyola side did not back down from the early setback as Graham Caygill equalized the score of both squads two minutes after the opener.

Teams went head-to-head as the game progressed, both keen to break the 1-1 goal deadlock.

In the 76th minute, Stallion’s Nathanial Alquiros seized a goal that overthrew the tie between the two clubs.

A few minutes after, Loyola answered with a goal of their own, this time by Simon Greatwich, who headed a striking ball off a corner in the 86th minute.

Regulation ended in a 2-2 standstill which encouraged the match officials to extend the game into two additional 15-minute halves.

In an outstanding turn of events, no goals were converted in either of the two additional halves.

As the game went into penalty shootout, the booters of Stallion outnumbered the penalties sank by Loyola, 3-1. The game ended with Stallion taking 3rd place in the FA Cup after posting a 5-3 win against Loyola. – Rappler.com