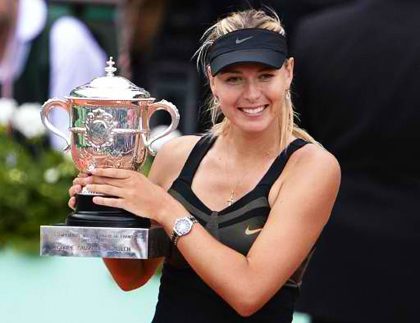 In what turned out to be largely a one-sided contest, the second seed and new world No.1 led from the start, fixing the 21st seeded Errani with her biggest shots and giving her little chance to employ her own, more considered game.

The French Open title for Sharapova follows her Grand Slam triumphs at Wimbledon in 2004, the US Open in 2006 and the Australian Open in 2008 and it crowns her return from a serious shoulder injury that nearly wrecked her career.

The 90-minute final though did little to restore the reputation of women’s tennis at Roland Garros, continuing a run of straight sets finals that date back to 2001 when Jennifer Capriati defeated Kim Clijsters in a three-set thriller.

“It’s a magical moment in my career,” Sharapova said in French, before quickly reverting to English.

“It has been such a journey for me to to get to this stage. Eight years ago it was my first breakthough Grand Slam and eight years later here I am.

“No matter how many Grand Slams you win … if it was my only one it would be just as special as it would be winning my fourth.”

Errani, when told that her runner-up finish would put her in the world top 10 for the first time, replied: “I don’t feel like top 10, but I will be top 10, so it’s incredible for me and I can’t believe it.”

It what was the first meeting between the two and the contrasts were stark – notably in height with the 1.88m tall Sharapova towering 24cm above the little Italian.

The 25-year-old Sharapova had the experience of winning three Grand Slam titles and has just been assured of regaining the world number one spot. Her global superstar status has made her the biggest-earning sportswoman on earth.

Errani, 10 days younger than her opponent, was little-known outside of her own country until she won three claycourt titles in the buildup to Roland Garros in recent weeks.

She then defeated two previous champions en route to a first appearance in a Grand Slam final.

Sharapova opened confidently on serve and then used her booming groundstrokes to pin back a tight Errani, breaking serve when the Italian hit long.

The Russian, playing in her first final at Roland Garros at her 10th attempt, moved 3-0 up and then converted a third break point to take a 4-0 lead.

Sharapova had made a dream start, but once again her propensity to double fault struck again, with two of them in the fifth game. She then hit a forehand narrowly wide on break point.

That seemed to settle Errani, who was bidding to become the second Italian winner at Roland Garros after Francesca Schiavone in 2010, and she pumped her fist at her team in the player’s box after holding serve for the first time.

Errani saved two set points at 2-5 and 15-40 down on serve in the eighth game as she started to pull Sharapova from side to side, but the Russian, despite another double fault, served out for the set.

Sharapova broke again to open the second set and moved 2-0 up as the Roland Garros centre court faithful tried to lift the morale of the outgunned Italian.

She held serve to get to 2-1 down and then had a break point to level, only for Sharapova to hit the line with a forehand.

The fifth game of the set was crucial as Sharapova opened her shoulders to hit some big winners, converting her third break point to go 4-1 ahead when a net-charging Errani failed to deal with a hard, angled drive from the Russian.

Errani was not yet quite out of it however, as she won four points in a row from 30-0 down to break Sharapova‘s service for the second time.

The Russian though put that aside to win the next two games, sealing her career Grand Slam on her third championship point when Errani failed to return an angled backhand. – Agence France-Presse