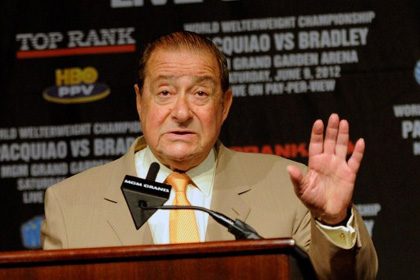 MANILA, Philippines – Boxing promoter Bob Arum is now demanding an investigation into what went into the split-decision verdict that saw Manny Pacquiao lose to Timothy Bradley on Saturday, June 9 (Sunday, June 10 in Manila).

The Saturday fight was scored 115-113 by all 3 judges: Duane Ford, C.J. Ross, and Jerry Roth. Only the last judge scored in favor of Pacquiao.

“I want to investigate whether there was any undue influence, whether the (Nevada Athletic Commission) gave any particular instruction and how they came to this conclusion,” Arum was quoted as saying.

“If this was a subjective view that each of [the judges] honestly held, okay. I would still disagree, but then we’re off the hook in terms of there being no conspiracy. But there needs to be an independent investigation because it strains credulity that an event everybody saw as so one-sided one way, all 3 judges saw it as close. It strains credulity,” he said.

Ford told Yahoo! Sports that the criticisms are coming from people who don’t know the way fights are judged. “I gave an honest opinion,” he said, explaining that “what happens in one round doesn’t carry over to the next round. They’re separate units.”

He said that Bradley’s hard body shots hurt Pacquiao in terms of scoring. “Bradley did an excellent job standing his ground as a boxer. Remember, it’s a boxing match and Bradley demonstrated his ability to box perfectly,” he was quoted as saying.

“When you score a fight of that magnitude, you know the criticism comes with the job. But unless you are totally focused on that scoring zone for 3 minutes, it’s impossible to score the fight correctly,” Ford told Yahoo! News.

“It was a close fight in my mind that could have gone either way. The result was nothing more than 3 judges giving an honest opinion, and nothing other than that,” Ford added.