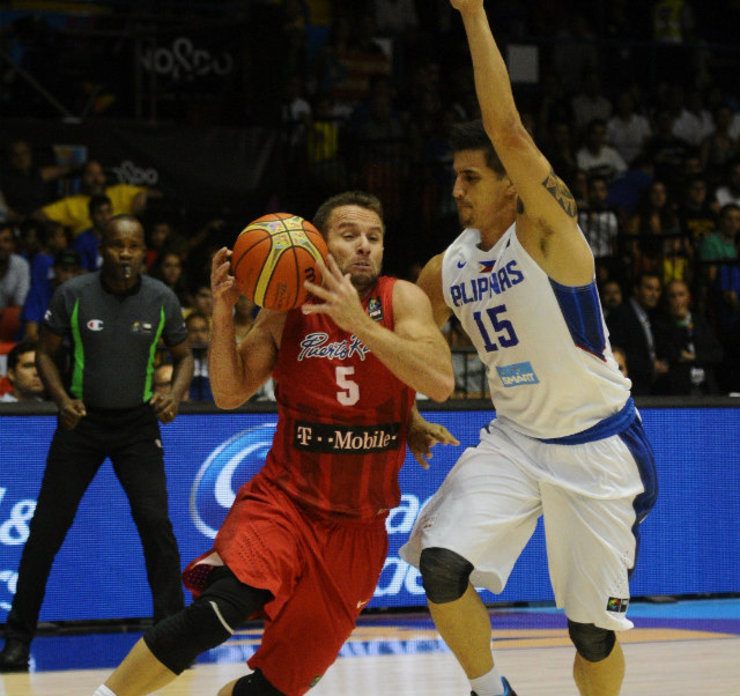 SEVILLE, Spain – A trip to the round-of-16 was not to be for Gilas Pilipinas.

Puerto Rico overcame a dismal beginning to outplay the Philippine men’s national basketball team for a 77-73 victory to eliminate Gilas Pilipinas from contention.

Minnesota Timberwolves point guard JJ Barea torched Gilas for 30 points and 5 rebounds while Ricky Sanchez scored 13 and grabbed 4 rebounds. Renaldo Balkman, who is banned for life from the Philippine Basketball Association for a choking incident in 2012, was a non-factor with 2 points.

AS IT HAPPENS: Gilas Pilipinas vs Puerto Rico

Andray Blatche led Gilas with 25 points on 9/16 shooting to go with 14 rebounds but turned the ball over 6 times. LA Tenorio was a hero early for Gilas, scoring 18 points on 6/9 shooting.

Turnovers hurt Gilas significantly, as they gave the ball up more times, 19-16. Despite having a 3-inch disadvantage in average height at 6-foot-3, Gilas had parity in rebounding at 32 total.

Gilas Pilipinas falls to 0-4 with a final game against Senegal on Thursday night remaining while Puerto Rico improves to 1-3 in the rankings. Puerto Rico will play Croatia next.

Blatche scored the first basket in the payoff period but Puerto Rico quickly answered with a three-ball. A few plays later, Ranidel De Ocampo checks in the ball game and hit a long two cutting Puerto Rico’s lead to just three, 64-61 with 6:32 left in the game.

Gilas took the lead back with a triple from Tenorio, 67-65.

Barea drive in transition at 6:26 mark of the third quarter trimmed the deficit to 2, 48-46. The speedy point guard nearly tied the count with 5:01 remaining in the third but botched a layup as the shot clock expired.

David Huertas hit an elbow three-pointer with under three minutes left in the 3rd period helping Puerto Rico inch closer, but Paul Lee furiously attacked in transition to give Gilas a 5-point cushion, 57-52.

The Puerto Ricans got their first taste of the lead with 40 seconds remaining after Puerto Rico converted on a tip-in by Jorge Diaz, 58-57. Puerto Rico then hit a triple to end the period on top, 61-57.

Gilas Pilipinas got off to a  hot start in the opening quarter led by the smallest man in all of FIBA 2014 – LA Tenorio. Tenorio buried a corner three off a pass from a driving Andray Blatche before hitting on jumpers all in the first period.

Tenorio finished the 1st quarter with 9 points on perfect shooting from the field.

Blatche also starred in the first finishing the period with seven points highlighted by a two-handed slam and a three-point basket off a pass from Marc Pingris.

Puerto Rico’s Ricky Sanchez started the scoring with back-to-back triples but no other teammate of his scored higher than his 6 points in the opening period.

Gilas Pilipinas wouldn’t let up in the second quarter hitting basket after basket but Puerto Rico was able to close the gap thanks to JJ Barea.