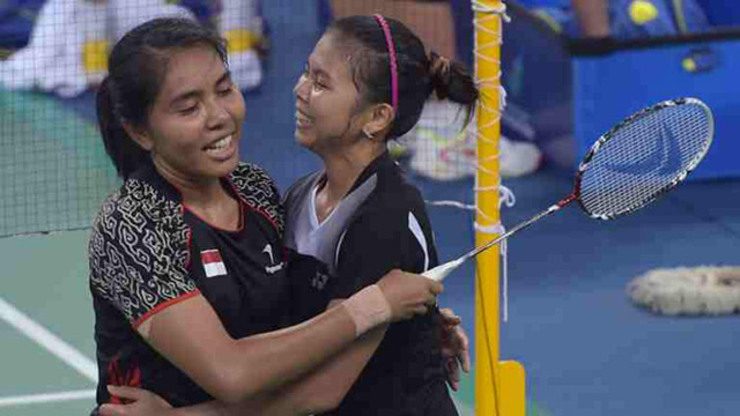 The seventh seeds took a convincing two-game win over the Japanese world number threes to become the first Indonesians to win the Asiad women’s doubles title since 1978.

It came after the Indonesians’ shock semi-final defeat of China’s defending champions Zhao Yunlei and Tian Qing, the world and Olympic title holders.

“Our coach told us before the match: don’t lose hope, don’t lose courage. Keep playing and playing until you win the game,” said an ecstatic Polii.

“It’s very hard to beat someone who never gives up, and we never give up.”

Asked how they will be marking the landmark win, Polii said it would be traditional South Korean alcohol. “My teammate at the apartment said whoever wins gold has to drink soju!”

With the opponents cheered on by a deafening band of supporters banging drums and chanting “Indonesia,” the Japanese pair were able to fend off the attacking underdogs.

Takahashi and Matsumoto held them to 15-15 in the first game, but the Indonesians’ speed and precision was too much and the favourites crumbled, hitting returns into the net to lose 21-15.

The second game saw the Indonesians firing shots at the feet of the Japanese who found it impossible to dig out returns.

It was one-way traffic as the Indonesians pushed the shuttle down the lines. Polii punched a powerful return from the back of the court which clipped the net and dropped down to take the game 21-9.

“They were much stronger than when we played them last time. Congratulations to them,” said Takahashi. – Rappler.com