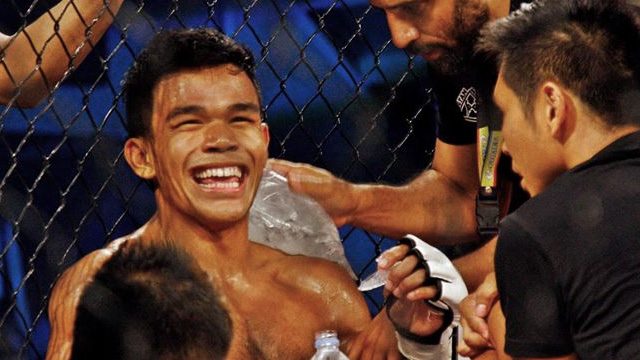 Two of the three judges scored the five-round contest with identical 48-47 counts for the hometown favorite, while the other cageside official saw it in favor of Dy with 48-47 mark.

Aguon took over the center of the cage early in the opening frame, blocking the lashing foot-strikes from Dy before pressing his Pinoy foe along the fence to achieve a single-leg takedown.

As Aguon was trying to pass the butterfly guard on the mat to position himself in side control, Dy managed to find his way back up and started to throw leg kicks.

Dy, the son of former boxing world champion Rolando Navarrete, showcased his punching prowess as he dropped Aguon with a left hook and incessantly clobbered right hands to mollify the counter assault.

The 23-year-old Dy entered the second round with a bloody gash above his right eye, giving Aguon an opening to pounce.

From the southpaw stance, Aguon wobbled Dy with a head kick and followed it up with a right jab-left straight connection.

The 5-foot-9 Guamanian attempted to slump his opponent to the ground once again, but Dy stuffed the takedown attacks by steadily securing his posture and base.

Dy was stalking and inviting his counterpart into a rough exchange in the dying minutes of the aforementioned period, but Aguon wisely backpedalled to smack a clean head kick and drilled with a flurry of fist blows that sent the Dasmariñas, Cavite-based combatant reeling inside PXC’s Terror Dome.

A determined Aguon was on the edge of giving his adversary the curtain call as he landed serious shots to the head, but the bell that signified the end of the round saved Dy from destruction.

Dy shifted the momentum back on his side in the third stanza, where he confused Aguon by mixing up his striking options.

As Aguon appeared to lose his steam due to an effort to score another takedown, Dy capitalized by hammering a well-timed left hook and then inflicted damage with Muay Thai knees.

“The Incredible” continued the punishment by pounding a quick kick to the head before trapping Aguon to nail with two crisp elbows.

To neutralize the stand-up leverage of Dy, Aguon resorted to his grappling pedigree in the fourth round, where he finally accomplished to drag his cage rival down to the floor.

Although Dy doubled his jabs to fend off the Spike 22 representative, Aguon held onto his body and went for a ride courtesy of a double-leg takedown.

After escaping from an ankle pick, Dy quickly got back into his feet and mauled Aguon with short elbows.

Aguon was eventually able to find his range as he reached in with jabs, but Dy closed out on a high note standing toe-to-toe until the final bell.

When the scorecards were revealed, two judges sided with Aguon, handing him the split decision victory and the unoccupied PXC bantamweight throne.

With the surprising triumph over Dy, Aguon improves his record to 8-4 and has now won two outings in a row since unsuccessfully challenging then-champion Michinori Tanaka for the bantamweight belt at PXC 40 in October 2013,

On the other hand, Dy downgrades his win-loss card to 5-3 and snaps his three-fight winning streak.

In addition, he fell short to replicate the feat of homegrown talents Ale Cali and Crisanto Pitpitunge as a Filipino fighter to win a world title in the Guam-based mixed martial arts (MMA) organization.

Dy aired his disappointment over the bout’s outcome on his personal Facebook account, stating that he sported his best foot to bring home the silver-plated strap.

“I’m not a sore loser, but I am sure I won that fight. I sacrificed everything for that fight, but they stole it from me. I’m sorry for all those who expect that I’ll bring the belt back home,” he posted.

A day before the marquee match-up, Dy was forced to go through extreme measures as he had to shave all the hair on his body to unerringly weigh 135 pounds.

In a past interview with Rappler, Dy disclosed that he had a difficult time balancing his academics and MMA career.

Besides owning up to an erratic schedule, Dy’s head coach Raysaldo Biagtan was not around to train him for the title tilt, prompting Dy to tap close friend and fellow PXC competitor Josh Sapinoso to stand in as his chief second in Guam.

“Kyle won it? Come on, PXC! It’s a hometown decision. Give your clear explanation. We know and you know that Rolando Gabriel Dy won the belt,” Biagtan wrote on Facebook. – Rappler.com