Facebook Twitter Copy URL
Copied
CP3 gets his first triple double as a Clipper and Mavericks outshoot Celtics from downtown. This and more on the November 4 edition of Rappler’s NBA wrap

MANILA, Philippines – Chris Paul tallied his first triple-double as a Clipper, the Mavs and the Celtics made in rain from downtown, and the Grizzlies managed to tame Anthony Davis. For the rundown of everything that happened in the league, check the November 4 edition of Rappler’s NBA wrap. 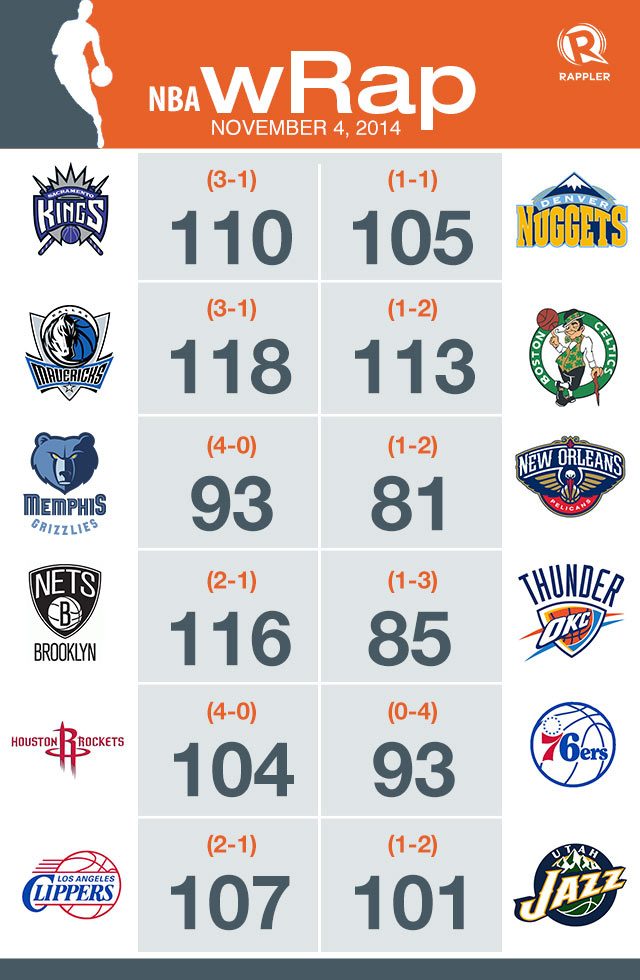 Darren Collison top scored and won the game for the Kings as he knocked down three free throws to keep the Nuggets at bay. The Kings took the lead for good with 3:18 left to play after Ray McCallum blew by the Denver defense for a layup.

It was raining threes in Texas as the Dallas Mavericks outshot the Boston Celtics from beyond the arc. Chandler Parsons and Dirk Nowitzki led the charge for Dallas as they shot a combined 8/9 three-point field goals scoring 29, 27 points respectively. Tyson Chandler effectively manned the paint for the Mavericks with 4 rejections to go along with 10 points and 12 rebounds – his first double-double since returning to Dallas.

Jeff Green top scored for the Celtics with 35 points while Avery Bradley had a career-high 32 points. Both shot a combined 9/18 three point field goals but didn’t get enough firepower from the rest of the team.

The Memphis Grizzlies leaned on a balanced attack to stay unbeaten early into the NBA Season. Marc Gasol (16) and Zach Randolph (15) led 7 Grizzlies who scored at least 9 points in the win.

Tyreke Evans scored 21 points to lead the Pelicans who shot an awful 4/24 from three-point land. Anthony Davis, who averaged 28.5 points and 16 rebounds in his first two games, was held to just 14 points and 8 rebounds against Memphis’ the tough interior defense.

Brook Lopez and Alan Anderson scored 18 points each as the Nets dominated the star-less Oklahoma City Thunder. Lopez took care of the inside while Anderson shot 4/4 from downtown to lead 6 players for Brooklyn who scored in double figures.

Reggie Jackson and Perry Jones combined for 39 points but OKC continued to struggle on offense without their main guns Kevin Durant and Russell Westbrook who are both sidelined with injuries.

Highlight of the Day: Brooklyn capped their magnificent first half with a bang as Mason Plumlee dunked the ball off an alley-oop from Bogdan Bognadovic to beat the halftime buzzer.

James Harden exploded for 35 points to help the Rockets keep their record unscathed as they deal the Philadelphia Sixers their 4th loss in as many games. The Rockets also drew a good game from forward Trevor Ariza who finished with 24 points on 6/9 shooting from beyond the arc.

Tony Wroten took over point guard duties for the Sixers who are missing the services of Michael Carter-Williams who is out due to a right shoulder injury.

Blake Griffin went on a tear on offense scoring 31 points on 14/21 shooting from the field but Chris Paul was all over the floor in this game tallying his first triple-double as a Clipper.

Fantasy Line of the Night: Chris Paul 13 points, 10 rebounds, 12 assists, 2 steals, 1 block. Paul sprained his foot a night earlier but it didn’t seem like the point guard was affected as he notched a triple-double to help the Clippers get their second win in three games. – Rappler.com