Eric Kelly hopes to get ONE FC title shot in 2015 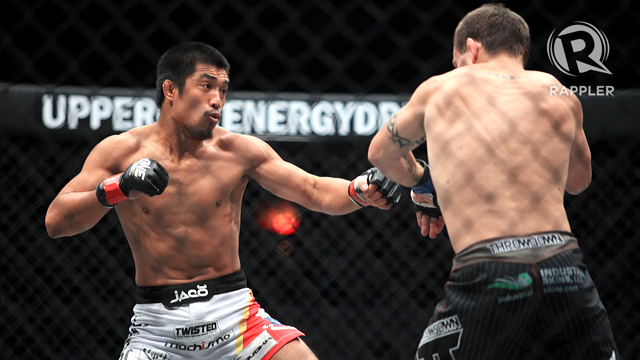 MANILA, Philippines – Filipino fighter Eric Kelly is hopeful that he will have a shot at the ONE Fighting Championship (ONE FC) featherweight title next year.

Kelly was originally penciled to challenge newly-minted featherweight titlist Jadamba Narantungalag in the main event of ONE FC: Warrior’s Way, which is scheduled to take place at the 20,000-seater SM Mall of Asia Arena in Pasay City, Metro Manila on December 5.

However, the championship clash never materialized as negotiations between Kelly’s management and ONE FC fell through after being advertised as part of the fight card as early as September.

The 32-year-old native of Baguio City refused to divulge details of the collapse in negotiations due to confidentiality, but he remains optimistic of pursuing the gold-plated strap against Jadamba in 2015.

“I still hope to get the title shot by next year since I earned my right to fight for the belt. If it’s God’s will that I will get my shot next year, it will be an honor and a privilege on my part,” Kelly said.

Kelly (11-1) became the No. 1 contender for the 145-pound division’s top prize after pulling off a come-from-behind victory over Rob Lisita at ONE FC: War of Dragons last July 11.

Bathed in his own blood, “The Natural” overcame significant difficulty to latch on a rear-naked choke to force Lisita to wave the white flag in the second round.

Despite his triumph over Lisita, Kelly’s nose was badly injured due to his refusal to relent with the hard-hitting Australian in the earlier proceedings of the bout, leaving him with no other choice but to put his championship aspiration on hold as he was not medically cleared to face then-titleholder Koji Oishi at ONE FC: Reign of Champions in August.

Jadamba took Kelly’s spot to square off with Oishi and successfully walked away with the ONE FC featherweight belt by routing the Japanese veteran via unanimous decision.

After ONE FC: Warrior’s Way was publicly announced this past September, Kelly was billed in promotional posters and videos along with other Pinoy combatants such as Eduard Folayang, Kevin Belingon, Ana Julaton and Brandon Vera.

Due to the aforementioned fallout between both parties for undisclosed reasons, Kelly was scratched off from the event, which is now headlined by a bantamweight title showdown between current champion Bibiano Fernandes and Dae Hwan Kim.

Rappler tried to reach ONE FC for comment regarding the issue, but Asia’s largest mixed martial arts (MMA) organization has not released a statement as of this article’s publication.

“Fighting in MMA is my passion and I want to be a world champion in this sport. I really hope all will be well someday,” Kelly shared. – Rappler.com