Dec 2, 2014 5:35 PM PHT
Ferdin Sanchez
Facebook Twitter Copy URL
Copied
No stranger to rising from the doldrums are the PH Men's tennis team bouncing back from a close loss to Thailand by dominating Singapore 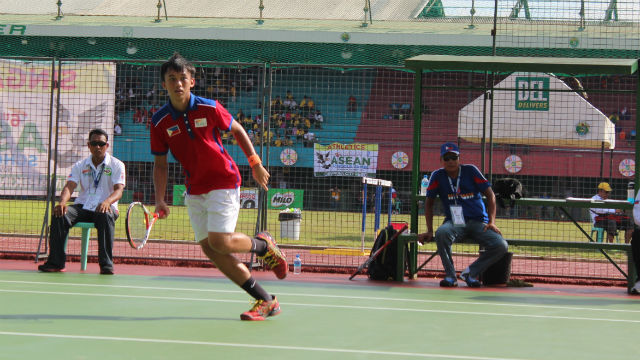 MARIKINA CITY, Philippines – After a tightly-contested loss to tournament-favorites Thailand, the Philippine Men’s Tennis team methodically thumped a wobbly Singaporean side, 5-0, earning them their first win in the 6th ASEAN Schools Games (ASG) at the Marikina Sports Center, Tuesday, December 2.

Looking to regain confidence after a disastrous start to his ASG campaign, Noel Damian Jr. booked his first win for the Philippine team with a resounding 6-2 victory over David Giritharan of Singapore.

Following a narrow defeat to his Thai counterpart on Monday, Dave Sebastian Mosqueda finally barged into the win column after successfully defeating Singaporean Muhd Shaheed by capturing a nail-biting 8-6 tiebreak victory in the second singles game.

The athletic pair of Andre Rodriguez and Ralph Juliane continued their good run of form in the tournament by defeating their Singaporean counterparts, 6-4, earning the Philippines a commanding 3-0 lead in the series.

The fleet-footed duo of Rolly Saga and Jelendro Amazona capped off the astounding performance of the Philippine team with a close victory over the Singaporeans in the final match of the lopsided series. – Rappler.com