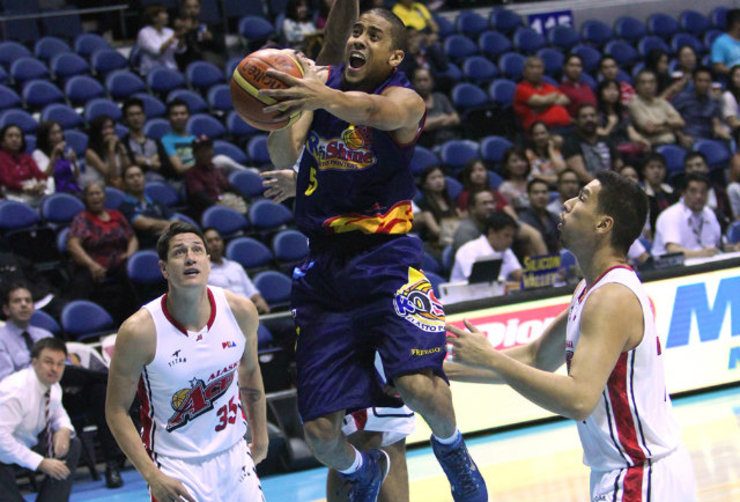 MANILA, Philippines – The Alaska Aces seemed like they were on their way to winning their critical game against the Rain or Shine Elasto Painters on Friday, December 5, and clinch a first-round bye in the playoffs of the 2014-2015 PBA Philippine Cup conference.

However, Rain or Shine took advantage of key defensive lapses by the Aces under the final minute of the fourth quarter, and leaned on the clutch play of rookie Jericho Cruz to deliver the fatal blows for a 98-95 win at the Smart Araneta Coliseum.

Now winners of six straight and in possession of an 8-2 record, the Elasto Painters have moved closer to securing a first-round bye of their own in the postseason.

“Special mention to Jericho Cruz,” Rain or Shine head coach Yeng Guiao said after the game. “He played like a veteran, he made his free throws, he made the winning basket, he defended well, and it certainly made us look good drafting him in the rookie draft.”

Cruz finished with 16 points, 6 rebounds, and 4 assists and shot 6-of-7 from the field, but it were his last two baskets and final rebound that proved as the deciding factors of the ball game.

Both teams went back and forth in the first three quarters, with no one establishing a lead that went beyond eight points.

After 40-year-old veteran Eric Menk nailed two free throws that increased the Aces’ lead back up to three, Alaska was able to force a jumpball situation on the defense end. However, the Elasto Painters won the tip and found an open Paul Lee, who knocked down a 3-ball to tie the game.

Off an Alex Compton time-out, Alaska found an open Calvin Abueva who hit a floater to put Alaska ahead 95-93. In the next play, Jeff Chan was fouled by Casio but made only the first free throw. After clanking the second, Cruz came up with an offensive rebound and converted a put-back to put ROS on top.

In the subsequent possessions, Menk missed his layup and Cruz was left open on the break, leading to an easy lay-in. That basket put the Elasto Painters ahead, 98-95, with .7 seconds to go. Alaska had one more chance to tie, but Casio missed his corner 3-ball attempt.

Lee finished with 19 points to lead ROS, while Gabe Norwood put up 12 markers. Chan struggled from the field on 2-of-9 shooting and 8 points.

Alaska was led by Abueva, who put up 18 points, 8 rebounds, and 4 assists. Menk contributed 16 off the bench, while Casio finished with 12 points. Cyrus Baguio entered the game shooting just 27% from the field this conference, and wasn’t any better against Rain or Shine with 12 points on 3-of-11 shooting.

As a team, Rain or Shine shot 42% from the floor and 26% from downtown. The Elasto Painters forced 19 Aces turnovers, leading to 21 points, and had more fastbreak points, 20-11.

A win by the San Miguel Beermen over the Talk ‘N Text Tropang Texters on Friday evening would assure them and the Elasto Painters first-round byes in the Philippine Cup Playoffs. A win by TNT over SMB, on the other hand, means Rain or Shine needs to defeat Barangay Ginebra San Miguel on Sunday, December 7, to clinch a bye.

“We’ll just give our best again. We expect a similar game on Sunday against Ginebra. So, we’re not there yet, but it’s a good jump-off to Sunday’s game. This win is a good jump-off for greater motivation to win on Sunday,” Guiao said about his team’s next game.