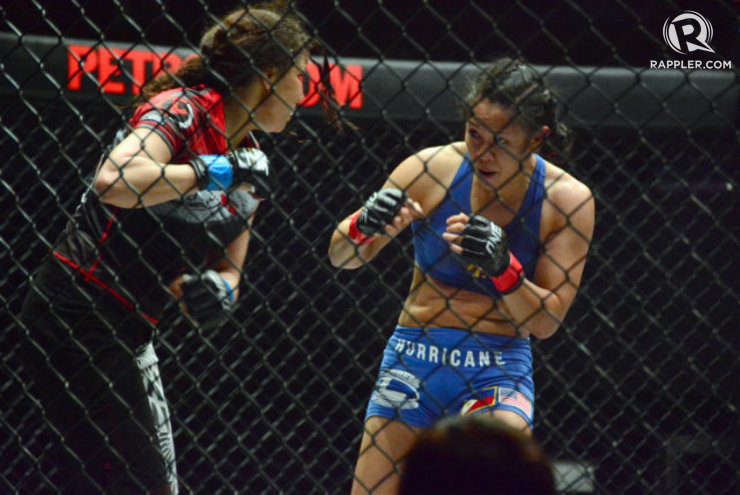 MANILA, Philippines – After suffering her first mixed martial arts loss four months ago, Ana Julation placed herself back on the winning track by dominating Walaa Abbas in their flyweight encounter on the undercard of ONE FC: Warrior’s Way on Friday night, December 5 at the SM Mall of Asia Arena in Pasay City, Metro Manila.

Fresh from a three-month crash course with renowned grappling coach Ricky Lundell, Julaton showcased her wrestling pedigree to maul Abbas with short punches from the clinch and accomplishing her official MMA takedown to receive the unanimous decision from the judges.

“I feel great thanks to coach Ricky Lundell. There are more things to learn in this sport, but I will keep improving,” she said in her post-fight interview.

The former boxing world champion trapped her Egyptian foe in her tie-up early on, landing hooks to head while likewise hammering body bombs with her knees.

After receiving a front kick to midsection from Abbas, Julaton latched on her arms to her opponent’s hips and dragged her down to the mat.

Abbas was making an attempt to return to her feet, but Julaton scooped her back to the floor and clobbered with series of heavy blows.

In the dying minutes of the first round, Abbas was pressing Julaton along the fence, but her effort received vicious elbows and a standing guillotine choke from the 5-foot-5 Pinay pugilist.

Julaton showcased her punching prowess in the second round, where she pummeled her adversary with numerous snap jabs and left hooks, prompting Abbas not to stand toe-to-toe with the Filipina and run away from responding shots.

As the bout reached the third period, Julaton resorted to her wrestling game plan as she never allowed a desperate Abbas to get a takedown.

Julaton concluded the 125-pound tussle by confusing Abbas as she switched from orthodox to southpaw stance and landed clean left hands to daze her opponent.

The 34-year-old Filipina fighter Julaton (2-1) has been vocal about her desire to face Malaysian combatant Ann Osman in a rematch.

Julaton has been vocal previously about her desire for a rematch Ann Osman, but didn’t call her out after the fight

The 34-year-old “Hurricane” failed to repeat her successful MMA debut as she bowed down to Osman by split decision at ONE FC: Reign of Champions in August.

Although Julaton had the clear striking advantage by rocking her Malaysian adversary on multiple occasions, Osman easily persuaded the cageside officials by scoring two legitimate takedowns in the bout and pacifying the 5-foot-5 Filipina on the ground.

“I am just looking forward on the next show,” she quipped.

On the other hand, Abbas downgrades her win-loss record to 2-2 and tastes her first setback since yielding to Puja Kadian in November 2012 under the Super Fight League banner. Unlike in her first ONE FC outing, Nagaowa never showed glimpses of her boxing background as she did not engage in a stand-up trade with her cage counterpart and pacified Sam with her clinch while looking to score for a takedown in the opening frame.

In the second stanza, the 27-year-old Baguio City native stuffed several takedown attempts from Sam and was able to maintain her leverage by not allowing the Kun Khmer practitioner to return to her feet.

On the ground, Nagaowa tried to fasten a rear-naked choke, but she ended up on the mount position, where she hammered Sam with series of hammerfists and elbow to compel referee Joey Lepiten to halt the action at the 1:26 mark. – Rappler.com