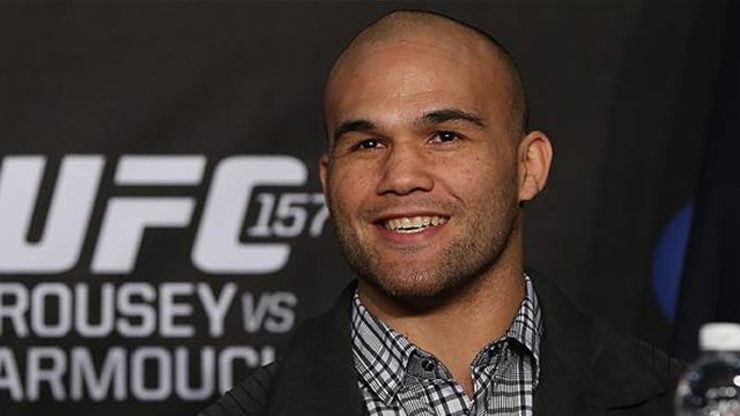 MANILA, Philippines – Filipino-American fighter Robbie Lawler edged out John Hendricks to walk out with the welterweight belt in their rematch at the UFC 181 pay-per-view event on Sunday, December 7 (PH Time) at the Mandalay Bay Events Center in Las Vegas, Nevada.

Both men first crossed paths this past March at UFC 171, where Hendricks claimed the 170-pound division’s top prize that was vacated by Georges St-Pierre.

Despite being behind in total strikes going into the final round, the 32-year-old Lawler turned up the volume late in the five-round tussle and took a split decision.

“That’s how we fight in the UFC. That’s how you fight championship fights,” Lawler said in his post-fight interview.

Fighting out of American Top Team in Coconut Creek, Florida, Lawler came out on fire in the opening moments of the first round as he pummeled Hendricks with knees to the body and flurries of punches to the head.

However, Hendricks weathered the storm as he resorted to his wrestling pedigree, pressing Lawler against the fence and scoring a single-leg takedown.

In the second round, “Bigg Rigg” smashed Lawler with efficient combinations of right hook and straight left and found a frequent home for his leg kicks.

At the end of the second stanza, Hendricks dragged Lawler down to the mat once again and latched on a deep guillotine choke, but he ran out of time.

With his longtime mentor Pat Miletich pleading for him to let his hands go, Lawler grew a little more active in the fourth frame, where he was able find an angle to nail several punches.

Hendricks went for another single-leg takedown to pacify the striking leverage of his opponent, but his effort received fist-strikes and elbows from Lawler as he held on too long in a crouched position.

As the championship clash reached the fifth round, Hendricks clinched and pinned Lawler, preventing any attempt from the latter to mount offense.

Lawler finally turned the tide in the last 30 seconds as he unloaded a barrage of blows, punishing Hendricks’ head with hammerfists and body with vicious elbows.

Hendricks created a way to return to his feet, but he was clobbered by a bombardment of winging punches from Lawler before the bout’s time expired.

As the result was read, Hendricks left the cage quickly and did not offer immediate thoughts of his second encounter with Lawler.

According to FightMetric statistics, Lawler outscored Hendricks in total strikes 208-to-149. 73 of his total strikes landed came in the fifth round.

With the victory over Hendricks, Lawler captures his first UFC gold in his 13-year mixed martial arts (MMA) career and improves his prizefighting record to 25-10, 1 NC.

In addition, he has gone 6-1 since returning to the Octagon in February 2013 and makes history as the first MMA competitor who has a Filipino heritage to win a UFC belt.

“It’s just been an amazing journey. I’ve got a lot of guys behind me. Thanks to the fans. But this wasn’t easy,” he expressed.

On the other hand, the 31-year-old Hendricks downgrades his MMA win-loss standing to 16-3.

The world’s premier MMA organization had previously announced that the winner of the title tilt between Hendricks and Lawler would face Canadian welterweight Rory MacDonald next.